Huge 40TB hard drives are on the horizon, thanks to Western Digital

Western Digital (WD) has announced its next biggest innovation in hard drives, and it could bring capacities all the way up to 40 terabytes.

The result will enable hard drives that could come with 40 terabytes of capacity and beyond by 2025.

At the heart of WD’s MAMR technology is a new spin-torque oscillator that generates a miniature microwave field that increases the ability to record ultra-high-density data. 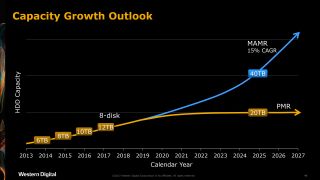 The projected curve of storage capacity growth
Image 2 of 3 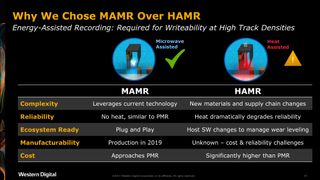 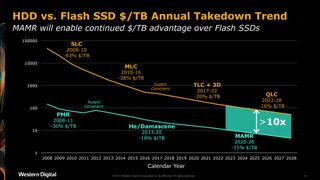 The projected prices of HDDs vs SSDs

How’s it all work?

Basically, as the recording arm floats over the hard drive’s data platter, this extra radiation from the spin-torque oscillator helps excite the disk drive’s data storing medium to increase the amount of information that can be written.

Previously, WD looked into a heat-assisted magnetic recording (HAMR) technology to dramatically increase data storage capacity. However, the company realized this process introduced an entirely new manufacturing process as well as too much heat that ruined the reliability of hard drives by cooking them at 400- to 700-degrees Celsius.

By comparison, the spin-torque oscillator MAMR achieves the same effect without any additional heat or having to retool hard drives completely.

For now, MAMR technology will be first introduced into WD’s enterprise and server storage solutions. But, given that the company’s helium-filled Helio drives in November 2013 trickled down to the consumer market by March 2016 (in less than three years), we’re likely to see MAMR hard drives for regular consumers soon enough.

The need for more storage is only going to increase in the future as cameras, like the GoPro Hero 6, improve and smartphones, like the iPhone X and Pixel 2, feature higher-resolution sensors.