During October’s Oculus Connect 4 event, Facebook unveiled the Oculus Go, an ambitious device that at last gives meaning to a term like “affordable virtual reality device.”

Up until now, your best options for wallet-friendly VR rigs were units like the sometimes-free Google Cardboard or the Samsung Gear VR headset, both of which involve awkwardly slipping a smartphone into the unit when you want to hang out in virtual spaces. It could get relatively pricey, too. If you picked up latest Samsung Gear VR with its controller, you’d be paying $129/£119/AU$199 for the privilege.

The Oculus Go, though, is a fully standalone “all-in-one” device. That means you no longer need a smartphone to power it as with the Gear VR, but more importantly, you don’t need to hook it up to your PC as you do with the pricier $399/£399 (around AU$640) Oculus Rift headset.

In providing middle ground between these two extremes, the Oculus Go represents an impressive leap forward for both virtual reality technology and affordability. Facebook CEO Mark Zuckerberg claimed at the Connect 4 event that he’d like to put one billion people in VR, and devices like this make such a goal seem more attainable.

Below you’ll find all the information we currently have on the Oculus Go.

The Oculus Go will come in at $199 (UK/AU pricing are still TBA, but £199/AU$299 are our best bet). The headset will release first to developers in November of this year, with a full consumer version ready by early 2018.

One of the chief complaints about virtual reality is that looking at images often feels as though you’re looking through a screen door, but Oculus’ VR chief Hugo Barra said the Go should help eliminate much of that problem.

The technology involved includes a fast-switch LCD display boasting a 2560 x 1440 resolution, which will also help get rid of some of the lag as you move and the images adjust to your movements. The lenses are even better than the ones currently used for the Oculus Rift, offering “significantly reduced glare.” In short, the Go is probably less likely to make you motion sick than its competitors.

Nor is Facebook neglecting the audio experience. Spacial audio is built right into the headset, improving the immersive experience as you move around. If you need more privacy, though, or if you believe the Go’s speakers just don’t deliver the quality you seek, you can hook up your own headphones through the 3.5mm audio jack as well. 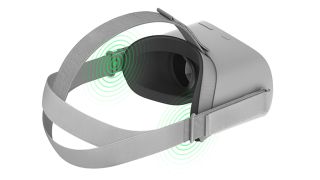 You’ll also get a remote controller with the with the Go, but it doesn’t fully track your motions, likely in an effort to keep the price down. Yet it intentionally resembles the remote used for Samsung’s Gear VR set, thus freeing developers to create apps for both units at once. Developers will start receiving kits for the Go sometime in November.

Last but certainly not least, the Go should be comfortable to wear. Manufacturers of virtual reality devices often don’t like to play up that these devices often leave you sweaty and a little stifled after prolonged use, but the Go appears to remedy a bit of that with the lightweight, breathable mesh fabric used for the facial padding and the comparatively light frame itself. It also feature adjustable straps, leading Barra to claim the unit  “practically disappears when you’re in VR.” 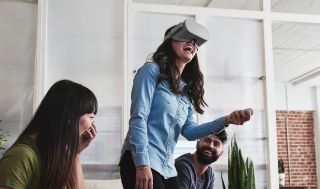 Attractive features all, but it remains to be seen what we’re really getting in terms of a “middle-of-the-road” virtual reality device. We know that you’ll be able to play everything in Samsung’s Gear VR library with the Go, but so far we don’t know if the Go is compatible with full-fledged Oculus Rift apps.

Smartphone-powered devices like the Gear VR grant only a taste of what bigger units like the Oculus Rift (and the HTC Vive and PlayStation VR) are capable of, and the Gear VR’s library is thus disappointing and relatively small. If Zuckerberg really wants to wow one billion people with what virtual reality offers, then the Oculus Go may still not be good enough.

On the bright side, if the Go ultimately proves too limiting, the fully featured Oculus Rift is now just $399. That’s a massive price drop from just last year, when you would have ended up paying $599 for the Rift headset alone and $199 for the Touch controllers. Now, though, you get all of that in a convenient and relatively affordable package. It still might be worth it to pay double the price of the Oculus Go if you really want to invest in virtual reality.

The catch is that the Oculus Rift remains a wired device, so you’ll have to use it while it’s still plugged into your PC. For that matter, you’ll have to constantly be aware of the cord so you’re not tripping and falling on your face while you’re fighting dragons of whatever.

That’s why we’re looking forward to Oculus’ so-called “Santa Cruz” headset, which is a standalone “all-in-one” device like the Oculus Go but with the presumed power of the Rift. And that sounds more like the future. We’ll keep you updated as we learn more about it.