iPad 2018 could borrow the best features from the iPhone X

Apple is planning to overhaul its iPad for 2018, slicing away bezels along with the TouchID fingerprint sensor. This move follows in step with the iPhone X, which has seen success, both critically and commercially, thanks to its refreshed design, improved performance and future-looking feature set.

Perhaps the biggest change going into Apple’s 2018 flagship tablet is the removal of the TouchID fingerprint sensor. As we’ve seen with the iPhone X, it will be replaced with FaceID as the sole method of logging in via biometrics, according to Bloomberg. To unlock the device, simply look at the front-facing camera and the TrueDepth face-sensing technology will authenticate.

While some will miss the ease and reliability of the fingerprint sensor, opting for FaceID technically allows for a larger screen and smaller bezels. Speaking of screens, this is a potential point of delineation between Apple’s next flagship tablet and its new, nearly all-screen smartphone: it won’t utilize OLED screen technology, but will instead likely stick with a tried-and-true LCD panel.

This is one of the big selling points for the iPhone X over its predecessors, and even though it’s disappointing to hear that it won’t come to next year’s iPad, it’s understandable given that Apple had enough trouble securing enough OLED supply for its phone, let alone much larger contrast-rich screens for this rumored tablet.

Omission aside, we’ll still get to appreciate a larger screen and smaller bezels thanks to the removal of the TouchID sensor. 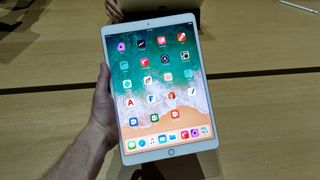 Apple’s tablets have traditionally been a half step more powerful than the most recent iPhone, and the 2018 tablet looks to be no exception. Sources close to its development told Bloomberg that the company is readying a faster version of its A11 Bionic chip, as well as a new graphics processing unit (GPU) for the next iPad, both of which will push it past the iPad Pro.

Additionally, Apple is said to be at work on the next iteration of Apple Pencil stylus, as well as some new use cases on the software end of things to squeeze more utility of it. Hopefully, that work translates in an iPad stylus that doesn’t require being recharged.