First, when answering a question, Bing will now validate its answers by sourcing a number of websites, not just one. And in cases where there are two valid perspectives, like, for example, in response to the question, “Is cholesterol bad,” they’ll be aggregated and Bing will show both at the top of the search page. Additionally, when there’s more than one way to answer a query, Bing will provide a carousel of answers.

The Bing team is also adding relevant analogies or comparisons to search answers that make the provided information easier to understand. For example, rather than just saying Syria is 71,498 square miles in response to a question of how big the country is, it would also say it’s approximately the size of Florida. “We want to reduce the number of times that people read a number and can’t make sense of it. And we want to do that by providing some context, or an analogy, or perspective, that puts it in more familiar terms usually related to their everyday experience,” Jake Hofman, a Microsoft senior researcher, said in a statement. Further, Microsoft is expanding Bing’s comparison answers, which were previously limited to product comparisons. 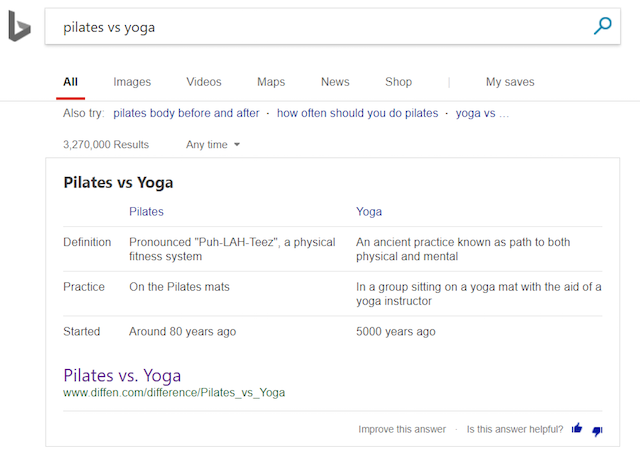 Bing will also help users find answers to broad or conversational queries by asking clarifying questions that will help refine the search. And Microsoft also introduced Bing’s advanced image search capabilities, which will now let users search images or objects within images to, for example, help them track down a particular fashion item they’d like to purchase.

Additionally, Bing and Reddit have teamed up to bring the information contained in Reddit threads to Bing’s search page. Now you’ll be able to search Bing for certain Reddit topics or subreddits, such as “Reddit Aww,” and Bing will surface a snippet of the topic. If a general search, like “Why wouldn’t my water boil,” could be answered well through Reddit conversations, Bing will also surface parts of those conversations at the top of the search page. And if you want to see certain AMAs or read through popular ones, Bing will be able to surface those as well. AMAs will show up in a carousel at the top of the Bing results page, and you can even view upcoming AMAs. 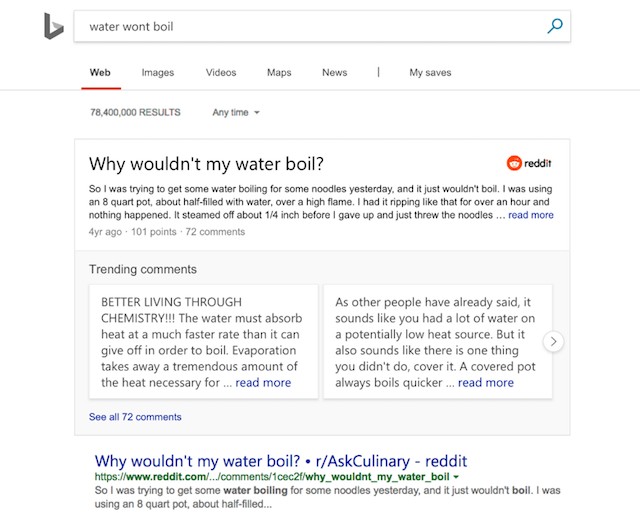 Microsoft also unveiled new AI-powered features for Cortana and Office 365 at the event. The Reddit partnership launches today, while Bing’s intelligent answers and conversational search features will start rolling out next month.