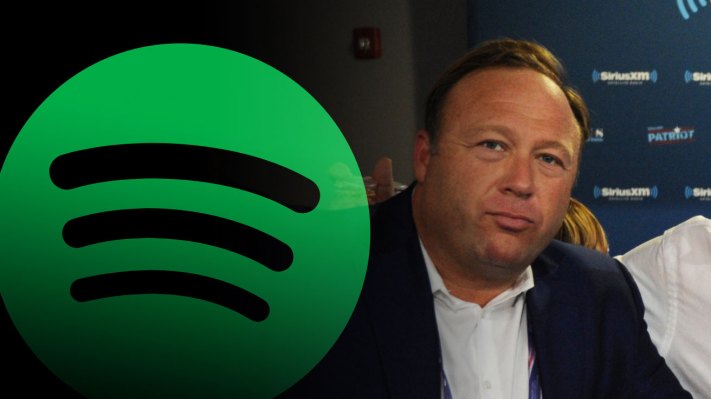 Yesterday, Spotify became the third tech platform in just over a week to take a stance on Alex Jones’s controversial far-right and conspiracy theorist content. The streaming service removed several Infowars podcast episodes due to their violation of the policy against hate content that Spotify released in May. This action follows strikes given against Jones by both YouTube and Facebook for videos containing content that violated those company’s policies, including Islamophobic and transphobic hate speech and child endangerment.

In a statement to Bloomberg on Wednesday, a spokeswoman for Spotify said the following:

“We take reports of hate content seriously and review any podcast episode or song that is flagged by our community. Spotify can confirm it has removed specific episodes of ‘The Alex Jones Show’ podcast for violating our hate content policy.”

While Spotify did not reveal the specific episodes removed or the specific terms of the policy they violated, the possibilities for removal cited in its updated policy include “content whose principal purpose is to incite hatred or violence against people because of their race, religion, disability, gender identity, or sexual orientation.” The policy also states that these violations do not necessarily include “offensive, explicit, or vulgar content,” but specifically hate speech with the intention to cause harm.

Other episodes of the Infowars podcast are still available on Spotify, as well as Apple Podcast and Stitcher.

While this strike against Jones does come on the heels of YouTube and Facebook’s previous actions, Jones is not the first to have content removed via Spotify’s new policy. In May, the company pulled music from R. Kelly and rappers XXXTentacion and Tay-K as well.

To monitor its service for content violating its hate speech policy, Spotify is collaborating with rights advocacy groups such as The Southern Poverty Law Center, The Anti-Defamation League, Color Of Change, Showing Up for Racial Justice (SURJ), GLAAD, Muslim Advocates, and the International Network Against Cyber Hate. Additionally, the company has built an internal monitoring tool called Spotify AudioWatch and is asking users to help flag hate content.

Decisions to police hate speech on tech platforms like Spotify, YouTube and Facebook have stirred up a lot of strong emotions on both sides of the debate. Balanced between open source and private enterprise, the path forward for these companies to create the safest and simultaneously “most free” space for their users is still being precariously trekked daily.