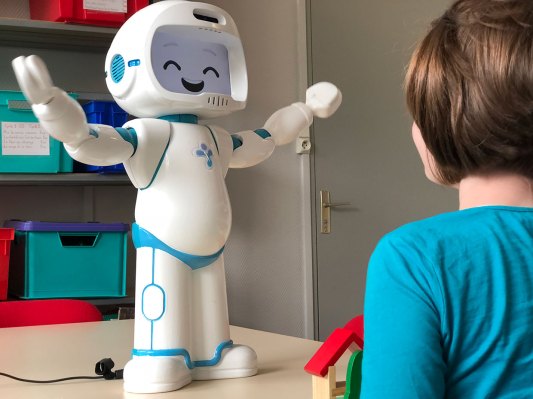 A little bot named QTrobot from LuxAI could be the link between therapists, parents, and autistic children. The robot, which features an LCD face and robotic arms, allows kids who are overwhelmed by human contact to become more comfortable in a therapeutic setting.

The project comes from LuxAI, a spin-off of the University of Luxembourg. They will present their findings at the RO-MAN 2018 conference at the end of this month.

“The robot has the ability to create a triangular interaction between the human therapist, the robot, and the child,” co-founder Aida Nazarikhorram told IEEE. “Immediately the child starts interacting with the educator or therapist to ask questions about the robot or give feedback about its behavior.”

The robot reduces anxiety in autistic children and the researchers saw many behaviors – hand flapping, for example – slow down with the robot in the mix.

Interestingly the robot is a better choice for children than an app or tablet. Because the robot is “embodied,” the researchers found that it that draws attention and improves learning, especially when compared to a standard iPad/educational app pairing. In other words children play with tablets and work with robots.

The robot is entirely self-contained and easily programmable. It can run for hours at a time and includes a 3D camera and full processor.

The researchers found that the robot doesn’t become the focus of the therapy but instead helps the therapist connect with the patient. This, obviously, is an excellent outcome for an excellent (and cute) little piece of technology.