Aside from the name, Intel seems very intent on closing the gap between itself and AMD Ryzen 2nd Generation. Coffee Lake Refresh, if recent leaks are to be believed, will introduce the company’s very first 8-core, Core i9 mainstream processor. However, Intel may also be introducing its first Core i7 part without hyper-threading to maximize clock speeds.

Now those are just the highlights of what Intel Coffee Lake Refresh may have in store for us, but there is plenty more in-depth detail we’re about to get into, so strap in for the long ride and we’ll tell you everything you need to know about Intel’s next-generation processors. 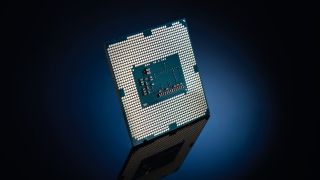 We’ve seen all sorts of leaked Intel roadmaps and rumors, but there’s a surprising consensus on Coffee Lake Refresh launching towards the end of 2018, specifically around October. One report even specifically dates the launch of the first few Intel 9th generation CPUs will land on October 1 with the remainder of the family arriving throughout the first quarter of 2019.

Seemingly official presentation slides leaked out to the public, revealing the Intel Core i9-9900K, Core i7-9700K, and Core i5-9600K will be among this first crop of processors to release in October 2018. After that, the next chip we can supposedly expect to arrive next will be the Intel Core i5-9400 in Q1 2019.

It’s too early to say what Intel’s new Coffee Lake Refresh processors will cost. We haven’t seen any rumors or leaked pre-order pages that suggest how these new CPU will end up being priced at yet.

That said, we can take an educated guess that the pricing of Intel Coffee Lake Refresh will either adhere closely to or be below the prices of current Coffee Lake processors – especially when AMD Ryzen 2nd Generation processors continue to undercut Intel’s lineup. Here’s the current pricing for Intel’s Coffee Lake desktop processors: 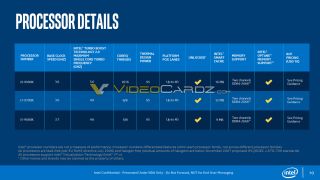 Although Intel Coffee Lake Refresh’s rumored October 1st reveal is still a ways off, we already have a pretty good idea of how the series will shape up, thanks to an innumerable amount of leaks and rumors. In fact, we have some semblance of specs for every single Coffee Lake Refresh processor, from the Core i3-9300 to the Core i9-9900K.

Thanks to a slip up in Intel’s latest microcode revision, the chipmaker itself officially listed seven of the following chips, with a few others being detailed by later reports.

Everything looks like the typical yearly refreshes we’re used to from Intel, that is until we get to the top-end Core i7 and i9 chips – that latter one being a first for Intel’s mainstream desktop processors.

The rumored Core i7-9700K will reportedly be a 8-core, 8-thread will be Intel’s first processor in a long time to abandon hyperthreading. Going by the rumors, Intel appears to be instead focusing on high boost clocks across all its cores with the Core i7.

The Core i9-9900K, however, will retain hyperthreading and feature the greatest amount we’ve ever seen on a mainstream processor. It’s rumored to be an 8-core, 16-thread chip with a 3.6GHz base clock with the ability to boost to 5GHz across two cores, and will reach 4.7GHz across all cores. None of this is confirmed, but the leaks are pretty convincing.

One other little tidbit we’re extremely excited about with Intel’s new line of processors is they all may feature a soldered integrated heat spreader (IHS). This has been all but confirmed by a photo of the Intel Core i9-9900K with its top off.

For the last few generations of chips, Intel has gone with a Thermal Interface Material (TIM – i.e. thermal paste) to transfer heat between the processor dies and the IHS – much to the chagrin of enthusiasts and overclockers. In theory, this purported gold-plated solder replacing the TIM will be a much more efficient heat transfer medium, which could lead to more impressive overclocking potential. 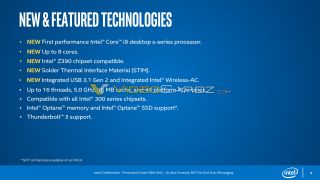 Of course, it wouldn’t be a new Intel processor lineup with a new motherboard and chipset platform. Interestingly enough, Intel’s forthcoming Z390 chipset has been all but confirmed to be real by both Intel and motherboard manufacturers since before Coffee Lake Refresh was even coined as a codename.

According to Z390 chipset specifications Intel briefly posted by accident, the new platform will support onboard 802.11ac Wi-Fi, Bluetooth 5 and USB 3.1 Gen 2 – all of which are features not found natively supported on the current Z370 chipset. Unfortunately, the new chipset will still only support up to 24 lanes of PCIe Express 3.0 and dual-channel, 2,666MHz memory.

While the exact specs of Intel’s rumored Coffee Lake Refresh processor have still yet to be confirmed, it seems more than a few of the engineering samples for these upcoming processors are already being tested.

GeekBench numbers for all three of the processors have leaked out, and it shows impressive numbers, especially for the Core i9-9900K which scored a Multi-Core Score of 33,037.

A second set of leaked 3DMark benchmarks for the Core i9-9900K appeared and they show the chip scoring an incredible score of 10,747 in 3DMark Time Spy. We don’t know how legitimate these results are. . Just keep in mind that these performance numbers might be inflated due to overclocking on both the processor and graphics card – on top of the questionable validity.

Meanwhile, the Intel Core i7-9700K has been spotted in the wild overclocking all of its eight-cores more than once. The chip was reported to be running at over 5.5GHz while liquid-cooled and at 5.3GHz while air-cooled.

What’s more, the Intel Core i7-9700K appeared in the Geekbench database, smashing records with a 6,297 single-core scores and 30,152 multi-core scores.

However, while most leaked benchmarks back this number up, we have seen a leaked review from El Chapuzas that shows only a minimal improvement over the previous generation. This report does look a bit sketchy, but we’ll know more about the final performance soon. 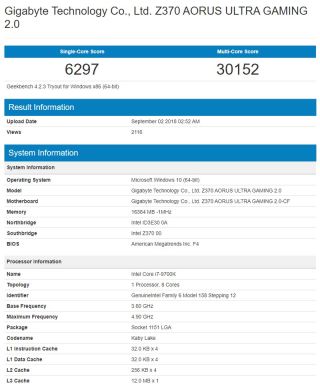 While we fully expected higher single-core performance simply by way of the 9700K rumored to be 200MHz faster than its Coffee Lake predecessor, we weren’t expecting a processor without hyper-threading to perform so well at multi-core tests. It seems inconceivable when the Intel Core i7-9700K has four fewer threads than the 8700K and eight fewer threads than the 2700X.

That’s all we know for now. There is surely still a ton of news to come. Per our usual advice, we encourage you return to this page periodically for in-depth coverage of the latest Intel Coffee Lake Refresh reveals.