Stan’s film and TV show library has grown by leaps and bounds since last December, driven in large part by the service becoming Disney’s new home for streaming content in Australia, bringing a large number of Marvel, Pixar and Lucasfilm titles along with it.

In addition to this, all 24 Bond films were recently made available to stream on Stan in 4K, giving the home-grown service a huge leg up in the blockbuster department.

Of course, with great content comes great licensing fees, which is why it’s perhaps unsurprising that Stan has announced a price hike for its Premium tier, bringing the monthly cost for 4K content up from $15 to $17 per month. 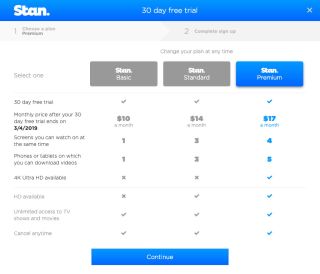 Along with the updated pricing scheme, Stan has also introduced a new Standard plan that sits between its standard definition (480p) Basic tier (which still costs $10 per month) and its Ultra HD Premium option.

Stan’s Standard plan will cost you $14 per month, providing three simultaneous high definition (1080p) streams and the ability to download shows and movies to a total of three devices at any given time. By comparison, the Premium plan offers four concurrent 4K streams and downloads to five phones or tablets.

For existing Premium tier customers, the updated pricing scheme will kick off on April 30, 2019. New customers, however, will find Stan’s price hike already in effect, though you won’t be charged until the 30 day free trial period is over.