The Biggest ‘Matrix’ Question of All: Red Pill or Blue Pill? 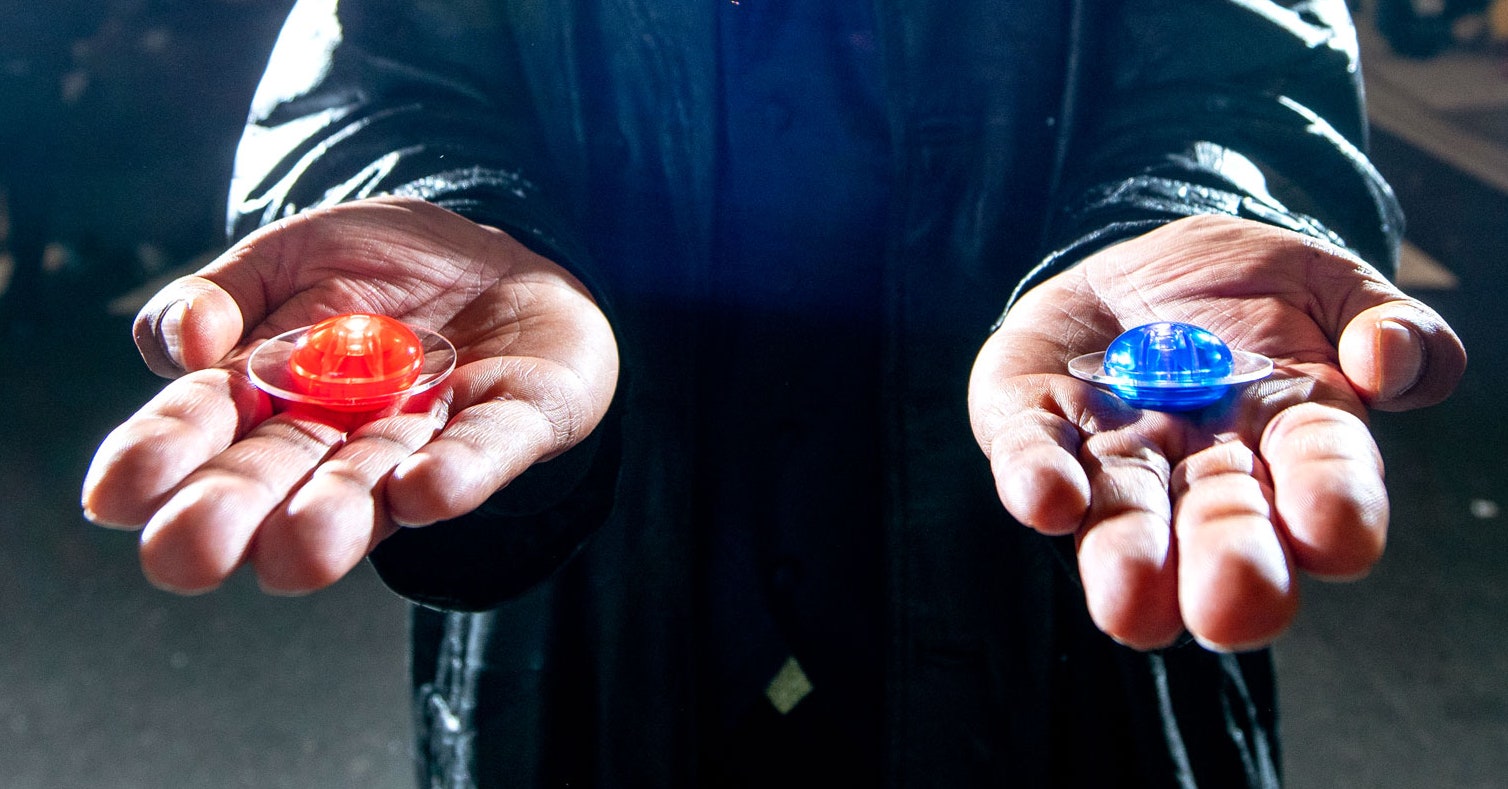 Sometimes existing on the internet can feel like being trapped in that dark room with Morpheus, the one where he holds out his hands to Neo and offers up either a pill of knowledge or a pill of blissful ignorance. Red pill or blue pill; know your enemy or live in peace; click or don’t click. Of all the ideas and images The Matrix sent spiraling into American culture—computer simulation paranoia, black leather trench coats, falling green code, spoons that don’t really exist—none has become so entrenched, or so contentious, as this one.

Of the two options, the red pill is more often discussed (it is Neo’s choice, after all). Yet as the world grows more polarized and less courteous, that blue pill is starting to look mighty swallowable. After all, life is hard, bad news is everywhere, and maybe, just maybe, ignorance is bliss. So we asked two of our writers, Emily Dreyfuss and Emma Grey Ellis, to debate the merits of picking the blue or the red pill. Follow the white rabbit.

Emily Dreyfuss: The Matrix is like the ’90s cyberpunk version of Plato’s cave, where everyone is sitting shackled looking at projections on a screen and only Morpheus’ crew and philosophers are able to see things for what they really are. Presenting the choice that way makes it ABSURD to pick the blue pill—who would choose slavery and ignorance over freedom?

If, as in the movie, we take the blue pill to mean ignorance of everything, then no one would. And I wouldn’t either. In fact, I won’t even try to argue for that because I honestly worry “that guy” from my freshman Phil 101 class in undergrad will show up—still dressed in his trench coat!—and “actually…” me until I die.

I don’t have time for that. And neither do you, reader.

But here’s the thing: In reality, life is not as simple as “knowledge means power” and “ignorance means slavery.” In the Matrix, once you’re unplugged you see every lie. But IRL, you just don’t know everything or nothing. Everyone lives somewhere in the middle. You know some stuff, not all of it. And moreover, just because you are awake to one problem doesn’t mean you aren’t causing the others.

And even people who verge on complete ignorance can still have power, and vice versa. Consider the dumb, rich child kings of history, born into a position of absolute power and lacking knowledge of, really, most things! Or the deeply knowledgeable social reformers who are out there working day in and day out to right the wrongs of society. They know a lot! They’ll tell you they are seeing behind the screen and they are still in the cave, shackled to a system. A system that can’t be undone just by suddenly seeing it exists.

In the movie, as soon as you take the red pill you’re supposedly partially freed up from the systems that enable those lies. The red pill lets you literally fly and hack the code that powers the world. Should a red pill exist IRL, that wouldn’t be the case. There’s no code to hack.

To me that’s the biggest argument against the red pill, which makes it seem like if you just could—zap!—learn the truth of the world then now suddenly your life has meaning and you can fight back against the lies! It’s not an argument in favor of the blue pill as the movie defines it, but it’s a reason to think red pilling is, well, impossible.

Emma Grey Ellis: Hang on, Emily, are you saying that knowledge and truth actually aren’t power? I hear you on the oversimplification—anybody who’s ever been milkshake ducked knows the pain of rooting for something or someone who seems good and righteous, but winds up being deeply flawed. Those betrayals might shake your faith in activism or institutions, but I don’t think individual failings mean that the pursuit of knowledge is a doomed exercise.

To me, problems like brilliant Nobel Prize winners somehow missing that they, and the institution that honored them, are wildly sexist are issues of people feeling that their education is somehow complete as-is. If we take Morpheus at his word, the red pill, in all its science fiction glory, is a sweeping dose of unalloyed truth—something akin to a complete education. That doesn’t exist in the real world, but empathetic, lifelong learners, people who acknowledge their own inevitable ignorance and strive to reduce it, do. Imagining a world without them, or considering their efforts useless, is bleak enough to make me want to reach for that blue pill.

I think you’re onto something with uncoupling knowledge from freedom, though. In a way, I think Neo and company model the way good, thoughtful people are forced to operate within a bad system even after they’re awake to its faults. Their knowledge gives them the power to navigate the Matrix, and, at times, bend it to their will, but while they’re inside, they’re still shackled to a chair by their headjacks, the same technology that used to be the primary tool of their enslavement.

That continued dependency is deeply unpleasant, way less glamorous than dodging bullets or suddenly knowing kung fu, and somebody under the influence of the system might come along and rip out your brainstem. But recognizing that you still have to work within the system in order to create systemic change is part of being someone who favors the red pill.

Dreyfuss: That’s an interesting interpretation of the knowledge/power struggle in the movie. And I don’t disagree. Of course there are systems that we can’t escape from and that we have to fight against from the inside.

I guess my problem with just saying, “yep, the red pill is better” is that the red pill is now something that exists in the real world. Its meaning has been totally corrupted and co-opted by message boards and people who define “truth” as something terrifying according to their own ideologies.

With that in mind, it’s hard to talk about the Aristotelian ideal of the blue or red pill as it was meant to be. Now it’s something else. The red pill is now conspiracy theories and hatred, and oftentimes muting them sounds like a good idea.

What does that make the blue pill? It’s too far from the original meaning to suddenly define the blue pill as truth, as opposed to the red pills conspiratorial agenda, but I think there’s something to the idea that the blue pill could be something like the state of ignorance—or safetly, bliss, etc.—that comes from being extremely offline and off-the-grid.

And that scenario, where blue pill means not ever knowing about the subreddit r/redpill or the hellscape of Twitter? Sign me up.

Ellis: OK, that made me laugh. And If I could blue pill away all my lurking in the internet’s worst corners, I’d seriously consider it. Without question, being constantly buffeted by online toxicity has made me a more cynical, more anxious person. But also, I learned valuable stuff—terrible glimpses into the United States’ fractured soul, misinformation and propaganda networks—in my time there.

I know probably better than most that picking the red pill puts me in bad company. Online, the red pill has become an emblem of misogyny and white supremacy because bigots mistake their own prejudices for inconvenient truths. To those guys, “red pilling” somebody means opening their eyes to a particular brand of persecution-complexed “conservatism”—convincing an initiate that they’re under attack by hateful progressive women/minorities/billionaires/countries that are bent on destroying them.

Sounds ridiculous (and it is), but this reading of Neo’s choice is so widespread that it’s made its way to some very unlikely places—like Kanye West‘s Twitter account. You’re absolutely right, Emily: Calling yourself “red pilled” is now in very poor taste.

But to me, the unfortunate context the red pill has acquired since The Matrix‘s release doesn’t keep it from being the right choice. Why let trolls’ misguided self-glorification ruin a perfectly good concept? Come on, those guys aren’t Morpheus. It’s not truth they’re peddling. It’s propaganda. If anything, they’re Agent Smith—and truth is how good people beat them.

Dreyfuss: I’m with you that it’s the right choice in the movie. But man, if I could blue pill my way onto a commune where there’s no internet access, and no constant stream of bad news in my feed, no worrying that any day now my son is going to get indoctrinated into some cult on YouTube, oof, that sounds lovely.

It’s exhausting to know just enough to be afraid and annoyed and outraged, but not really be able to meaningfully change things—at least not quickly. I mean, hell, even Neo is exhausted by his battling for truth. Once he wakes up, everything only gets worse—and worse, and worse, and worse for three whole long movies. Neo himself barely survives the torture of enlightenment and the responsibility it demands. Good for him for keeping at it! But don’t you think as he wanders the wasteland of reality, he ever just wishes he were back in his apartment, his body healthy, his room a mess, worrying about nothing more important than his dumb job?

Ellis: If Neo doesn’t long for normal by the end of Revolutions, I’d be seriously concerned for him—he loses everything! I think there’s a way in which the internet has come to give us a more aggressive version of the truth than even the red pill. Neo takes the red pill once. If you’re like me, you get about a dozen crazy-making push notifications per day.

Dreyfuss: Yes! My way of dealing with that has been to uninstall all social media from my phone, and turn off push notifications. It’s like Blue Pill Light.

Ellis: Which is how the world used to be, in a way, right? Truth hasn’t changed, but the amount of time we’re meant to and able to spend engaging with the worst bits of it has expanded hugely. You have to moderate it in some way if you want to avoid burning out. Maybe Morpheus’ options aren’t good enough anymore: I want the purple pill.

Dreyfuss: Would that be where you get the truth in small doses?

Dreyfuss: That’s exactly how I like my truth, dribbled into my veins slowly, like a slightly muted stream of digital rain.

Check out all of our 20th anniversary coverage of The Matrix. If you want to revisit it, The Matrix trilogy is free on Amazon Prime.