Libreoffice vs Apache OpenOffice: how to choose the right free office suite for you

When it comes to free office software, there are two main choices: LibreOffice and OpenOffice (or, to give it its proper name, Apache OpenOffice). The two are remarkably similar, so how can you choose the right one for you?

First, it’s worth thinking carefully about whether you need desktop office software at all. Provided you have an internet connection, Google Docs, Sheets and Slides might offer everything you need, without the need to install anything, and with the extra bonus that everything you create will be automatically saved to the cloud. No more lost documents, or having to email work to yourself.

However, if you write, create spreadsheets or make presentations regularly, you might find that you need some of the more advanced features that you only get in desktop software. If you’re in that camp LibreOffice and OpenOffice are two of the best options around. They’re both free to download and use, even professionally, and they’re open source, which means their code is publicly available.

Indeed, they’re so similar that you might have a hard time choosing between them, but there are some key differences.

Why are they so similar?

LibreOffice and Apache OpenOffice share a common ancestor: OpenOffice.org. This open source office suite was originally developed by the software giant Sun Microsystems, but not all of its developers were happy with the project’s direction after Sun was acquired by Oracle.

As a result, a group of developers broke away and created a new fork. This became LibreOffice, which has been hosted by The Document Foundation ever since.

In 2011, Oracle announced that it was ending development of OpenOffice.org, and donated the code to Apache 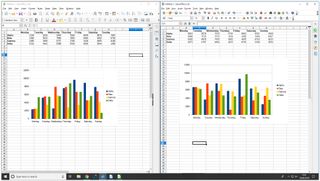 What are the differences?

The frequency of updates means there’s also more potential for bugs in LibreOffice, but any that do appear are likely to be resolved quickly.

Both LibreOffice and Apache OpenOffice offer essentially the same set of apps (Writer, Calc, Impress, Draw, Base and Math), but LibreOffice also includes a tool called Charts. As its name implies, this is a small application specifically for creating charts and graphs, ready to be imported into other documents. Handy for presentations.

If you’re multilingual, it’s worth noting that Apache OpenOffice offers more in terms of flexibility when it comes to languages, letting you download additional language patches as plugins. If you choose LibreOffice, you’ll need to pick one language at the start and stick with it. 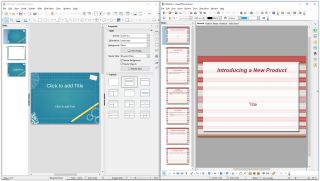 If you often need to make presentations, LibreOffice has the edge in terms of the number (and quality) of slide templates available. Both software suites offer plenty of user-made designs to download, but LibreOffice’s selection of pre-installed options is far superior to OpenOffice’s.

As you can see from the screengrabs, LibreOffice and Apache OpenOffice are almost identical. The functional differences are very minor; for example, the sidebar in OpenOffice Writer is open by default, whereas in LibreOffice it’s closed.

LibreOffice does look a little more modern thanks to its larger icons and leaning towards subtle pastel hues, but it’s nothing that’ll affect your everyday work.

This is likely to be the biggest deciding factor for many people. Although both LibreOffice and Apache OpenOffice can open and edit native Microsoft formats DOCX and XLSX, only LibreOffice is able to save to these formats.

If you’re going to be sharing documents with people using Microsoft Office, LibreOffice might therefore be the better choice.