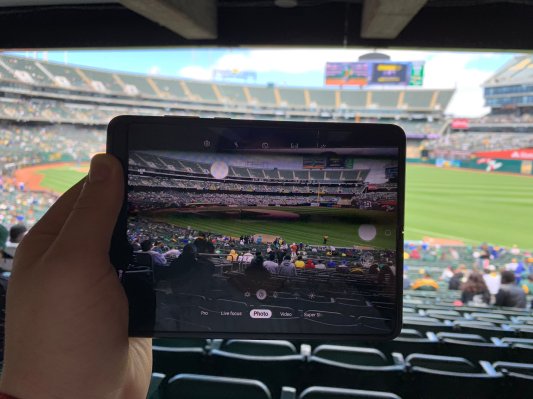 I’m starting to get that thing where my iPhone XS screen feels super tiny when I switch back from the Fold to send a text message from my number. Someone recently asked me if I’m going to have trouble giving the device back to Samsung in a few days, and while the answer is a decided “not really,” the march toward even larger screens does feel inevitable — and I do believe folding phones will be an important part of that push.

Of course, I also believe that we’re as close as a generation or two out from this first shot on that foldable feeling pretty big and bulky (some folks who’ve seen the phone have already said as much about it). I’m back at the airport today, and both airline representatives and TSA agents (who see a LOT of phones as people are checking in) seem pretty impressed with it.

I had the phone standing up at a 45 degree angle on the bathroom sink this morning to watch the news as I brushed my teeth. That’s pretty neat. And If I’d had the forethought, I have loaded a couple of movies on it for the flight. It definitely beats the seatback screens on Delta.

In addition to the fingerprints on the outside, the inside gets like crazy dusty after any kind of use. And a lot of that collects in the little reservoir between the screen protector and the outside lip.

The top shot is from yesterday’s A’s game (the dark line along the seam is a shadow). You can use the front facing screen as a view finder while taking photos, but it’s pretty small. The inside, meanwhile, makes you feel like one of those people who use their iPads to take photos in public. Once you get over that, it’s a pretty nice way to view shots, though.

And no, it’s not broken yet. We’re still waiting for official word from Samsung about what happened there. The Fold is on track for an April 26 release here in the States, in spite of everything, and even as a China release appears be delayed.