Huawei Band 4 Pro: what we want to see

The Huawei Band 4 Pro is likely to land later this year and it could shake up the fitness tracker scene by providing a plethora of features at a budget price.

At least, it has got the potential to if it builds on what the Huawei Band 3 Pro offers without building on the price too much.

For now we don’t know much about it, but we’d expect rumors to start rolling in soon and will add them to this article as soon as they do. And in the meantime we’ve come up with a list of features and improvements that we want to see, along with educated guesses at when it might land and what it might offer.

The Huawei Band 3 Pro was announced in October 2018 so there’s a fair chance we’ll see the Huawei Band 4 Pro in or around October of this year (2019), especially as the Huawei Band 2 Pro landed in the second half of 2017 – so there was roughly a year between the previous two wearables. 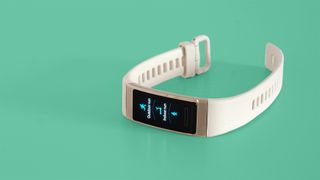 There aren’t any Huawei Band 4 Pro rumors yet, but we’ll be sure to update this article as soon as we hear anything credible about the wearable.

We can take an educated guess at some things though. For example, it will almost certainly sport full GPS, a heart rate monitor, water resistance and a reasonably low price, given that the Huawei Band 3 Pro has all those things.

Below you’ll find the main things that we’d like to see from the Huawei Band 4 Pro. Some may well happen, others are less likely, but we want them all.

1. A comfier fit and a sleeker design 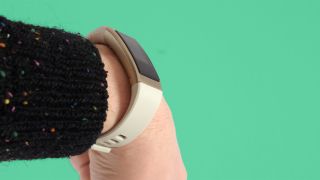 The Band 3 Pro is a bit bulky. Image Credit: TechRadar

The Huawei Band 3 Pro isn’t a bad looking wearable. In fact, with its glass and metal build it’s arguably quite nice, but it’s rather chunky, which isn’t ideal, especially for something we’d be working out while wearing.

More problematic though is how it feels on the wrist, as in our review we found that it’s just not quite as comfy as some rival bands like the Fitbit Inspire HR, so we’d like to see both the size and comfort improved for the Huawei Band 4 Pro.

So for the Band 4 Pro we’d like to see it reinstated, and if they can improve it – by adding multiple different guided breathing exercises for example – then all the better. 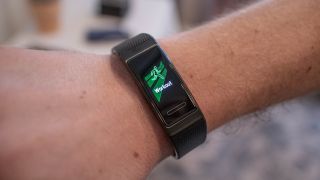 We don’t want to wait to work out. Image Credit: TechRadar

Getting full GPS at all in budget fitness bands is far from guaranteed, but we’re almost certain the Huawei Band 4 Pro will have it since the Band 3 Pro does.

However, the Huawei band 3 Pro’s GPS takes longer than average to lock on in our experience, so we’d like to see it work faster on the Huawei Band 4 Pro. After all, if you’re trying to work out the last thing you want is to be left standing around.

The Huawei Band 3 Pro has a bright, colorful screen, but late at night or when in the cinema you don’t necessarily want it to be bright, and while the brightness can be adjusted this has to be done manually – there’s no auto brightness. It’s an obvious feature that we’d really like to see added to the Huawei Band 4 Pro.

The Huawei Band 3 Pro has a clip-on charger like many wearables, but for the Band 4 Pro we’d like to see support for wireless charging, and not of the proprietary kind.

Not only would that be convenient, but that way if we need to juice it up when we don’t have the charger with us there’s a solid chance someone will have a wireless charger we can use. 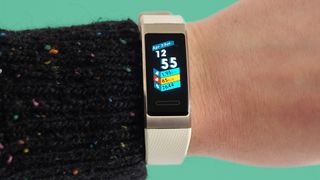 The Band 3 Pro doesn’t have many faces. Image Credit: TechRadar

The Huawei Band 3 Pro only comes with a selection of three different watch faces. Now, by fitness tracker standards that’s not awful, but given that many smartwatches give you thousands to play with we’d like to see a greater selection offered on the Huawei Band 4 Pro. That way you’d be better able to tailor it to your style.

This is one of our more unlikely hopes for the Huawei Band 4 Pro, but with the Apple Watch 4 and Withings Move ECG sporting an ECG (electrocardiogram) it’s not totally out of the question.

This feature goes beyond merely monitoring your heart rate and can potentially detect some serious heart issues, such as atrial fibrillation, so it would be great to see it on more devices.