The number of rumors and leaks we’re getting on the iPhone 11 continues to grow: yesterday we heard some new analyst predictions and today we’ve got some new case dummies to examine.

Shared on social media and reported by SlashLeaks, the dummies look like they’ve been manufactured to help case designers get ready for the new batch of phones in September. 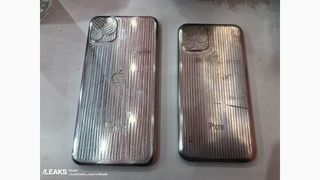 If these enclosure models are genuine – and there’s always an “if” with a leak like this – they don’t tell us much we don’t already know, but they back up previous rumors.

There are indeed “iPhone XI” and “iPhone XI Max” versions, supposedly 6.5 inches and 5.8 inches in terms of display dimensions. What we don’t get a look at here is the follow-up to the iPhone XR, but who knows how Apple will label that.

What we think we know so far

The triple-lens rear camera setup that we’ve heard so much about is in evidence again, so it looks a good bet that this is indeed the way Apple’s going this year.

All will be revealed in full in September – like last year, the rumors suggest three iPhone 11 models will be on show, with three different screen sizes.

Two-way wireless charging is something that Apple is being tipped to introduce to the iPhone range in 2019, while we’ve also heard unofficial whispers that the battery is going to get significantly bigger too.

On top of all that you can expect the usual bump in speed and performance as Apple tries to keep pace with rival handsets, including the Google Pixel 4.