The next Samsung Galaxy Fold could fold twice over

Samsung has officially delayed launching the Samsung Galaxy Fold to address malfunctions reported by early reviewers in the device’s folding screen. And yet, a leak has emerged claiming the company is working on two different designs for dual-hinged foldable displays, according to Korean site The Bell.

The display concepts are referred to by letters, which describe their form: the ‘G-type’ has two outer secondary screens folding inward toward each other (much like Xiaomi’s foldable phone design). This resembles the patent found in March, which LetsGoDigital visualized with a rendering (above).

The other concept – the ‘S-type’ – folds in thirds like you’d expect (one resting over the center screen, one under, like a snake). This looks much like the Samsung patent discovered back in November, as visualized by Mobielkopen. 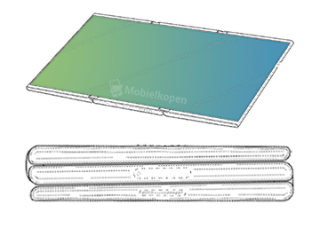 Both the designs described by The Bell are larger than the 7.3-inch Galaxy Fold’s fully-unfolded screen. Per The Bell, it seems like the G-type will have an 8-inch screen, while the S-type will reach 13 inches; they are allegedly intended to compete with Apple’s 7.9-inch iPad Mini and the largest 12.9-inch iPad, respectively.

How likely are these designs to see the light of day?

It’s impossible to tell how far Samsung has developed these designs, but we can look to past patent and concept leaks to see how much those resembled the final product.

For example, this leak from mid-2016 shows a clamshell layout that bears a striking resemblance to the eventual Samsung Galaxy Fold. While the final design ended up being far taller/narrower than these wide halves (and doesn’t have the mid-hinge charging port), the exposed hinge is very similar to the Fold’s eventual look.

There’s other evidence that Samsung isn’t abandoning a center-fold layout. Back in March, a report noted the company had two potential foldable phones in the works – one with a horizontal (and thus, wide rather than tall) ‘clamshell’ design while the other folds vertically. Both, however, seem to have the screen on the outside, much like the Huawei Mate X.

All the optimism might be stymied by the Galaxy Fold launch delay, though, as Samsung rushes to fix issues with its much-ballyhooed first-to-market flagship foldable. Who knows how these struggles will impact Samsung’s folding designs going forward.