Update: The Asus Zenfone 6 is now official. You can read our first news of the phone here, and we’ll have our first impressions on the device soon.

While the ZenFone 6 might not be on your radar it probably should be, as it looks set to offer high-end specs and features likely at a lower price than rivals.

Ahead of the announcement, some things have already been confirmed by Asus – we know for example that it has a top-end Snapdragon 855 chipset – while a number of other details have been rumored.

You’ll find everything that we know and suspect about the phone below, including information on when you might be able to buy it and what it might cost.

The Asus ZenFone 6 is being announced today (May 16), so we’ll know all about it very soon. Want to tune in? Here’s how to watch the live stream.

Of course, that’s not necessarily when you’ll be able to buy the phone, but it’s likely to go on sale within a couple of weeks of that date and there’s a chance it will be made instantly available.

Of course, we wouldn’t expect a direct currency conversion, but that suggests this will be a reasonably expensive phone, while still probably undercutting the likes of the Samsung Galaxy S10 and Huawei P30 Pro.

That’s just a rumor for now, but what we know for certain is that the ZenFone 6 will have a Snapdragon 855 chipset, as a teaser tweeted by Asus includes an image saying as much. 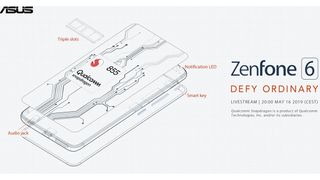 The image, which you can see above, also lists a 3.5mm headphone port, a notification LED, a ‘smart key’ and ‘triple slots’ – likely for two SIM cards and a microSD card.

On Instagram meanwhile, an Asus executive posted Morse code which, according to GSMArena, reveals that the phone will have a 5,000mAh battery and a dual-lens rear camera, with 48MP and 13MP lenses.

That 5,000mAh battery claim has been made more obvious in a subsequent teaser from Asus which you can see below. This one also includes a clearer look at the phone, highlighting the lack of bezel at the top.

These aren’t the only ZenFone 6 teasers either, as previously the company posted another image (below) which shows the outline of a phone that seemingly lacks bezels, a notch or a punch-hole, suggesting the Asus ZenFone 6 might have an all-screen design. 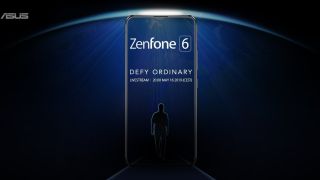 The teaser also reads “Defy Ordinary”, which suggests the phone could have an unusual design or features.

There’s no shortage of leaks either. According to a listing on AnTuTu for example, the ZenFone 6 has a 1080 x 2340 resolution screen, 48MP cameras on both the front and back, 6GB of RAM and 128GB of storage, as well as running Android 9 Pie.

We’ve also seen leaked images possibly showing the phone. Both sets were shared by Sudhanshu Ambhore, with the first ones being case renders posted on SlashLeaks.

Here is your first look at the #Asus #ZenFone6 case renders.1/2 pic.twitter.com/wPVlfyMLxdMay 8, 2019

You can see that there’s a dual-lens camera on the back, but also a clear notch on the front, which we weren’t expecting based on teasers.

Confusingly though the second, newer set of images from the source shown below also supposedly show the standard ZenFone 6, yet show a completely different design, with a slider mechanism for both the selfie camera and the speakers – this is more in line with what we’d expect from the flagship, whatever it launches as.

Making matters even more confusing we’ve also now seen leaked images from Roland Quandt (a reputable leaker), which show a different design again, this time with an all-screen front and a camera that can swivel from the back to the front.

This is the most recent leak and the one that looks most in line with official teasers, so we’d say this is the most likely design – though again, there might be multiple models with different design.

Questions about the design aside, if the rumors pan out, then along what we already know for sure about the ZenFone 6 it sounds like it could be a truly high-end handset in most ways, though the screen resolution could be slightly disappointing. But then this probably won’t cost as much as most flagships. We’ll know for sure soon.