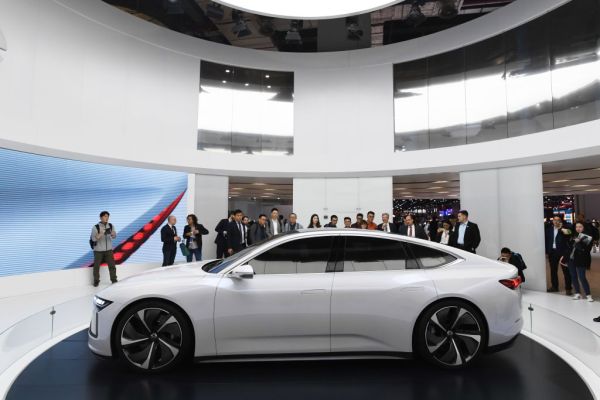 Chinese automotive startup Nio is tweaking its plans for future electric vehicles, a move prompted by sluggish sales of its ES8 model.

Nio, which reported in its unaudited financial results Tuesday a loss of $390.9 million in the first quarter, is taking a number of measures in response to a slowdown in sales. Those changes include a shift in its vehicle production plans, a reduction in R&D spending and a 4.5 percent cut to its workforce, the company’s founder and CEO William Li said during an earnings call.

The drop in sales is primarily driven by the EV subsidy reduction in China and macroeconomics trends in the country that have been exacerbated by the U.S.-China trade war, Li said.

Nio began deliveries of the ES8, a seven-seater high-performance electric SUV, in China in June 2018. And while deliveries initially surpassed expectations, they have since slowed in 2019. Nio reported it delivered 3,989 ES8 electric SUV in the first quarter, a 50 percent drop from the previous period.

Li suggested that the upcoming ES6, a cheaper SUV that will come to market next month, could be cannibalizing ES8 sales.

Meanwhile, Nio has changed its strategy for future electric vehicles. Instead of bringing its next-generation ET7 to production, the automaker will instead focus on a third vehicle under its ES series lineup.

“Looking ahead to the second quarter, we expect an even more challenging sales environment and anticipate overall sequential demand and deliveries to decrease, as competition continues to accelerate and the general automobile market in China remains muted. Against this backdrop, Nio is focusing on rolling out our ES6 nationwide, and at the same time, improving overall network utilization and operating efficiencies,” Nio CFO Louis T. Hsieh said in a statement.

Nio showcased a preview version of the ET7 during last month’s Shanghai Auto Show. The automaker has said it will design and develop the ET series with a new next-generation platform 2.0 (NP2) that will feature Level 4 autonomous driving capabilities, a designation by SAE that means all of the driving is handled by the vehicle under certain conditions.

The launch timeline of the ET series will largely hinge on how Nio’s joint venture with Beijing E-Town International Investment and Development unfolds. Under the joint venture, Beijing E-Town International Investment and Development will invest 10 billion yuan ($1.45 billion) and will support a new factory for its NP2 platform vehicles, Reuters reported. The company said the parties are still working towards a final binding definitive agreement on the investment.

As those discussions shake out,  Nio plans to “leverage the platform technologies from the ES8 and ES6 to create a new model design.” This third vehicle model tied to the ES8 and ES6 platform is expected to launch in 2020.

Meanwhile, the company has high hopes for its nearer term ES6. The company has 12,000 pre orders for the ES6; some 5,000 of those were added in the five weeks since the Shanghai Auto Show. The first deliveries of the smaller SUV will begin in June.