Gigabyte’s new SSD is over 40% faster than previous technology

Gigabyte had plenty to show off over at Computex, including a blazing fast new solid-state drive (SSD), alongside new high-end motherboards and a number of interesting looking gaming monitors.

Let’s start with that Aorus NVMe SSD, which is an M.2 model that uses PCIe 4.0 – a new, super-quick interface that is supported by the aforementioned new motherboards – more on those shortly – to push solid-state speeds to even greater heights.

We are talking sequential read and write speeds of 5,000MB/s and 4,400MB/s respectively, which is incredibly fast, putting even something like Samsung’s recently unleashed 970 Evo Plus to shame (which achieves read/write performance of a claimed 3,500MB/s and 3,300MB/s via PCIe 3.0).

Gigabyte has also equipped this SSD with a full-body copper heatsink for better cooling, with the added benefit that it makes the drive look pretty snazzy, too.

The Aorus NVMe Gen4 SSD will come in three capacities – 500GB, 1TB and 2TB – although pricing hasn’t yet been mentioned. The SSD is apparently ready to roll, and will be arriving ‘soon’, although the manufacturer didn’t specify an exact launch date. 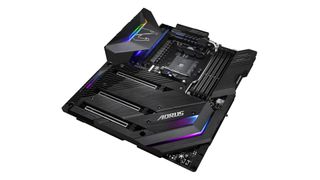 Mother of all motherboards?

Of course, those hugely impressive speeds are achieved thanks to the Aorus NVMe SSD’s use of PCIe 4.0, so you’ll also need a new motherboard that supports the tech such as one of Gigabyte’s X570 series, along with one of AMD’s incoming Ryzen 3000 processors. X570 is AMD’s new PCIe 4.0-toting chipset, and offers much faster performance for SSDs (and indeed graphics cards down the line).

Gigabyte has further honed the design of its motherboards with these X570 products, the company claims, using low inductance, server-grade circuit boards, and 16-phase digital power with an advanced thermal design.

In other words, the firm is aiming to please overclockers, and the top-end board, the X570 Aorus Xtreme, boasts goodies including a “thermal reactive armor design with fins-array heatsink [and a] NanoCarbon baseplate”, along with built-in Wi-Fi 6 (and Bluetooth 5), not to mention multi-zone LED lighting.

Smart fan technology will also be on-board, which includes a sensor to measure noise levels, and allows the user to adjust things for quieter operation if needed.

There will be seven different variations of X570 motherboards from Gigabyte in total, with a range of features and costs, moving down from the aforementioned flagship (although again, no pricing has been mentioned yet).

It’s also worth noting that as well as the above SSD, Gigabyte was showing off an 8TB SSD with claimed sequential read speeds of up to 15,000MB/s – although technically this is actually four 2TB PCIe 4.0 M.2 drives (as seen above) slapped together in a RAID 0 array on the Aorus M.2 PCIe 4.0 riser card.

So technically, it’s not a single SSD, but effectively four bolted together, and doubtless it will be (even more) eye-wateringly expensive; but it’s an interesting development nonetheless. 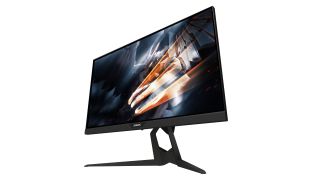 Finally, Gigabyte was keen to introduce what it’s billing as the world’s first ever tactical monitors, as opposed to just plain-old standard gaming monitors – the distinction being that tactical monitors help you to play better.

How? The monitors include game assist features, including an “aim stabilizer,” dashboard timers (for things like spawns), along with active noise cancelling and an OSD sidekick for conveniently and swiftly adjusting settings – such as for the mouse and keyboard – on-the-fly.

The three displays are headed up by the Aorus KD25F, which is designed for first-person shooters and carries all the aforementioned features. It runs with a 24.5-inch TN screen that has a 0.5ms response time, along with a 240Hz refresh rate. The resolution is Full HD and the panel delivers 100% of the sRGB color spectrum, as well as supporting FreeSync and being G-Sync compatible.

There’s also the Aorus CV27F, a curved monitor aimed at MOBA players, and the curved Aorus V27Q which is Black Equalizer 2.0 enabled, meaning it displays dark scenes with better clarity (helping you see better in the shadows in some games – and making movies look better for that matter).

The V27Q is a curved (1500R) VA panel which supports FreeSync 2 HDR and has a resolution of 2,560 x 1,440, with a 1ms response time and a 165Hz refresh rate. Hopefully some pricing and launch date information for these monitors will follow soon enough.