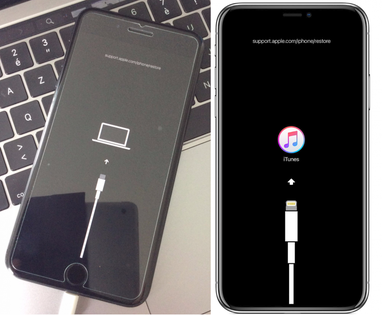 At this point, you probably have every reason to skip the new iPhone 11 and iPhone XR2 – they don’t look good. But wait. Apple itself has now ‘accidentally’ revealed a shock new iPhone upgrade which might just change your mind.

Look closely at Apple’s first beta of iOS 13 and you will find there is a new recovery mode screen for your iPhone, and on it the Lightning cable shown in iOS 12 has been swapped for USB-C. With iPads moving to USB-C last year and MacBooks using nothing but this connector, it would be a huge boost to see iPhones make the transition to this industry standard as well. It’s a radical move too, given Apple’s exclusivity over the Lightning port and its lucrative MFi licensing program.

The change was first spotted by Apple enthusiast Raphaël Mouton, but it has been hiding in plain sight. Amusingly, Apple fan site iMore used the new recovery screen in an iOS 13 downgrade guide without noticing it.

Cynics will point out that the new iOS 13 symbol shows the USB-C cable pointing to a MacBook and claim it’s just the end of a Lightning to USB-C fast charger. That’s possible, but iOS has pointed a cable at the MacOS version of iTunes and used a Lightning cable. With iTunes now being replaced, Apple has had to update the image but the company appears to have missed the big giveaway it reveals.

iPhone XR2 render based on multiple leaks. Is the Lightning jack on the way out?

Furthermore, despite a stereotype of Apple wanting its products shrouded in mystery, the company has a track record of leaking details about future products in each new version of iOS. In the early betas of iOS 12, for example, Apple ‘accidentally’ included iPhone XS Max details including the design, dual sim and its new split-screen functionality. In the early betas of iOS 11, Apple leaked the HomePod and the iPhone X’s Face ID.

So yes, Apple loves an ‘accidental’ leak in each new generation of iOS and they are always well timed. The HomePod leak appeared when Apple was under pressure to respond to Amazon and Google, Face ID appeared when iPhones designs were ridiculed for their big bottom bezels (thanks to Touch ID) and the iPhone XS Max information came when Apple was pressed to make an iPhone with a larger display.

So while it’s possible Apple has shown a MacBook cable, I would be sceptical looking at both the history of iOS and the history of Apple’s behaviour. As the ridicule builds regarding their controversial new designs, the iPhone 11 and iPhone 11 Max need an image boost so letting the world quietly know the range is moving to USB-C would be a great way to do just that.

Apple iOS 13 All But Confirms The Death Of 3D Touch

Apple’s Folding iPhone Is Coming Together