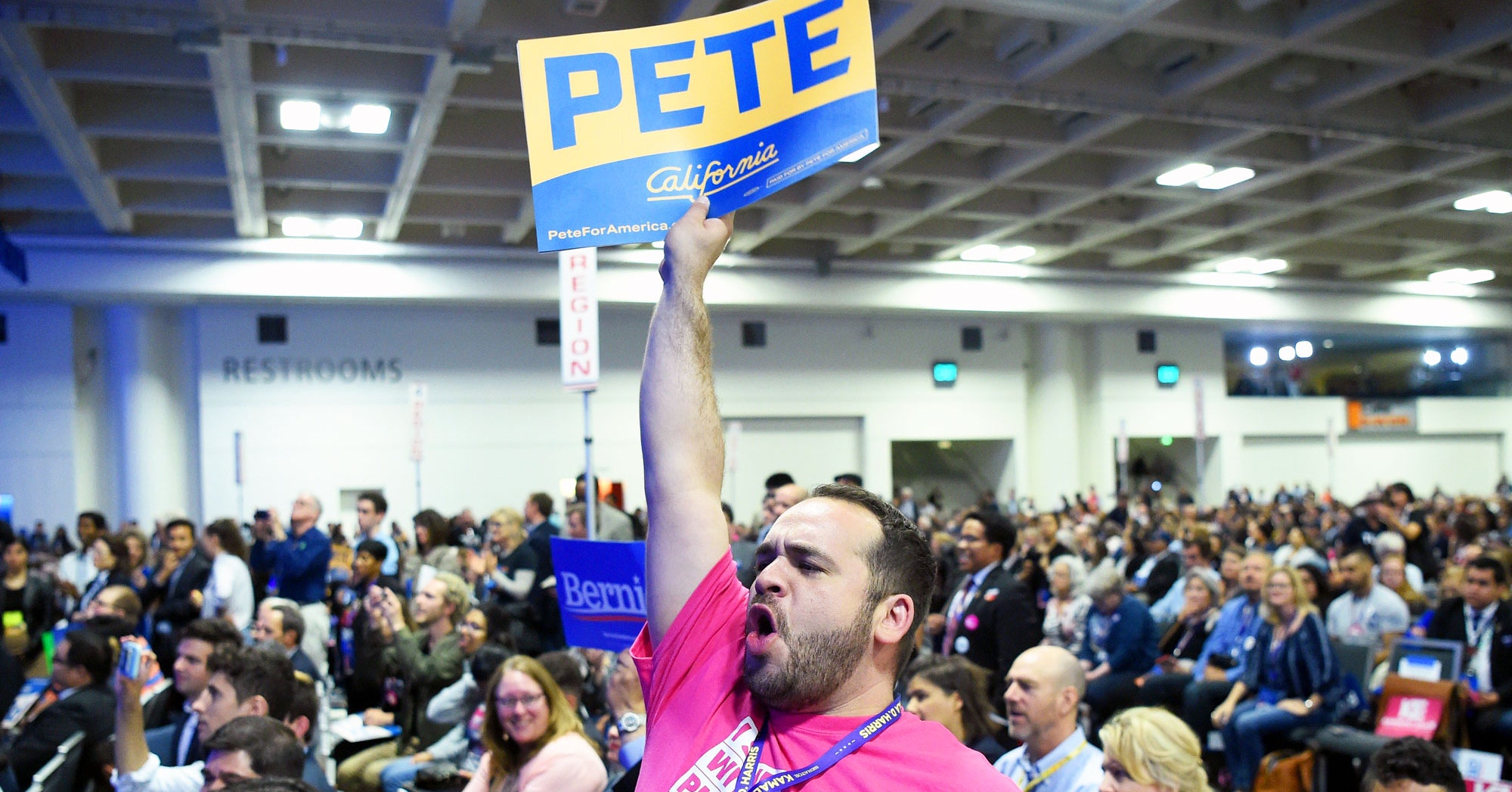 Presidential campaigns get compared to a lot of things. A marathon. A film. A battleship. An iceberg. An “MRI of the soul.”

More recently, the metaphor of choice has been the tech startup. Even amid a growing backlash to Big Tech, evoking a no-nonsense startup retains some appeal, with its suggestion of scrappy agility, innovation, and single-minded focus. But at least one candidate takes the idea more literally: Pete Buttigieg, the 37-year-old mayor of South Bend, Indiana, whose campaign has rocketed from underdog to top-tier status seemingly overnight.

“We want to build a campaign that’s a little disruptive, kind of entrepreneurial. Right now, it feels like a startup,” his campaign manager told the AP earlier this year. And to help manage this startup’s growth, the campaign turned to Swati Mylavarapu, a Silicon Valley tech executive and investor. As Mayor Pete’s national investment chair, she’s been advising a rapidly expanding team since April, and applying lessons from the startup world to the campaign trail.

“At the outset, I have a fundamental appreciation for how small but very nimble teams of talented young people can do really big things and change the world for the better,” Mylavarapu says. “I mean, that sounds very simplistic, but you have to remember that in the world of campaigning that’s not always how it goes.”

Mylavarapu spent years working at startups like Square before becoming a partner at venture capital firm Kleiner Perkins in 2015. After the 2016 election, she co-founded The Arena, an accelerator program that supports politically progressive startups like Flippable, which uses data and crowdsourcing to target vulnerable red districts and turn them blue. She also started an investment fund, Incite Ventures, and a nonprofit organization, Incite Labs, with her husband, Nest cofounder Matt Rogers. (TechCrunch has called them “the definitive Silicon Valley power couple.”)

Mylavarapu’s decision to join the Buttigieg campaign can be viewed as a continuation of these recent political efforts, but its roots go back much further: Mylavarapu and Buttigieg met as classmates at Harvard, and then studied together as Rhodes scholars in Oxford. They’re partnered on public service projects ever since.

“The Pete that’s up there giving a speech in Bloomington, Indiana, on what the future of American foreign policy should look like … is the same Pete that I used to go knocking door to door with through the IOP [Harvard’s Institute of Politics] when we were in college,” Mylavarapu says. “For me that is so important, because authenticity is something that you can’t manufacture. In my work with The Arena and other political programs, it’s the hardest thing to find in a candidate, you can’t make it up.”

“I count myself lucky to not only have the benefit of Swati’s innovative mind and expertise, but to work with a longtime friend as we pursue a bold new vision for the future of our country,” Buttigieg said in a statement to WIRED.

Buttigieg is hardly the first candidate to embrace Silicon Valley’s help. Building out a product team with talent from the likes of Google, Facebook, and Twitter has become standard practice for serious candidates, while tech employees are a welcome source of donations, especially for Democrats. Progressive startups, like those supported by Mylavarapu, became a force for grassroots organizing during the most recent midterms. There’s even a former venture capitalist serving in Congress: Josh Harder, representing California’s 10th district. (And while Silicon Valley might not count Brad Parscale as one of its own, the digital consultant did help get Donald Trump to the White House in 2016—and aims to keep him there, as Trump’s campaign manager for 2020.)

But when it comes to campaign finance staffers, you’re still far more likely to see a political or development background on resumes than a VC firm or startup accelerator; Buttigieg’s national investment director Anthony Mercurio, for instance, is an alum of Hillary Clinton’s 2016 campaign. Not that her untraditional background fazes Mylavarapu.

“I was surprised when I stepped into this role,” she says. “I didn’t know that so many of the elements that I had learned to watch for and create at Square and with the companies in our Incite portfolio would apply in this campaign context.”

Mylavarapu sees parallels everywhere. You have a “killer” product—in this case, a candidate and his message—and you want to generate organic, word-of-mouth buzz. And when people are checking this product out—maybe on the website, maybe at a campaign event—you want to keep following up with them about it. Here’s Mayor Pete on an issue you cared about. Mayor Pete is coming to your area! Mylavarapu calls it a conversation, but it also sounds like a sales funnel. We noticed Mayor Pete is in your shopping cart, would you like to complete your order?

“We’re trying to take some of those design principles and apply them in our campaign organization.”

Another thing presidential campaigns have in common with startups? There’s an awful lot of them right now. In a historically, comically crowded Democratic field, Buttigieg managed to raise over $7 million in campaign contributions the first three months of 2019; only Bernie Sanders, Kamala Harris, and Beto O’Rourke earned more. The Federal Elections Commission’s next reporting deadline is June 30, a sort of quarterly earnings report for presidential committees. It will be the first FEC reporting period to include Joe Biden, who reportedly raised over $6 million the day he officially announced his campaign, throwing into sharp relief some challenges that Buttigieg faces.

“With Pete, we’ve got a candidate who’s not starting with the national profile that some of the other frontrunners have,” Mylavarapu admits. “But I’d say the opportunity there is that we can create an even higher ceiling.”

Mylavarapu points to what her team calls “grassroots events.” Rather than just wooing political high-rollers and throwing dinners at $2,800 a head—although the campaign hosts those, too—these are more like fundraising rallies, where thousands of Mayor Pete fans, or just the Mayor Pete curious, can see the candidate speak for donations starting at $25. The campaign is also distributing free tickets to targeted demographics, like young voters.

“The idea is to make it super open and accessible for folks at different price points,” Mylavarapu says. On Monday, Politico reported that the campaign has raised over $1 million across 16 of these events. They’re a real-world complement to the campaign’s viral social media moments and digital outreach. “When you look at groups like The Arena and Flippable and Swing Left and Indivisible, for example,” Mylavarapu says, “all of these are groups that have used the best of lightweight, tech-enabled methodologies and small nimble teams of very talented people to mobilize huge portions of the country. And so we’re trying to take some of those design principles and apply them in our campaign organization and plans as well.”

With an increased focus on the role of money in politics, especially on the left, campaign finance has become potentially fraught terrain. Major candidates like Sanders and Elizabeth Warren vocally rejected big-money donors and super PACs early on, turning instead to online fundraising and small donations. Buttigieg’s campaign, too, has instituted a policy of not accepting corporate PAC donations, and has said no to money from federal lobbyists after returning some donations earlier this year. While Mylavarapu’s Silicon Valley network is sure to be useful as the campaign courts deep-pocketed liberals, she emphasizes their focus on reaching new donors, and making sure that “there is an investor base that looks like America.”

The campaign’s word choice around these topics is strategic. Mylavarapu’s title is “investment chair,” not finance chair, for a reason. “Versus some of the more traditional language around finance, I think it gets us into a really interesting understanding of all of the ways in which people can choose to invest in a campaign,” she says. “You can give your time, you can give your expertise, you can give your enthusiasm and validation in your own communities and network, and you can give dollars, too.”

But as Mylavarapu knows as well as anyone, it’s the return on that investment by which success is measured.

“When I told Pete that I would do this,” Mylavarapu says, “one thing that he made very clear, and that I think we make clear across the campaign, is that we are absolutely in this to win the election.”