When Google Stadia was launched, it seemed like it could transform mobile gaming from a realm of basic puzzle games and mixed ports, to a genuine competitor to console gaming – but perhaps we should have waited for more information before getting our hopes up.

in the run-up to E3 2019, Google filled us in on the games list and pricing structure of  the Stadia platform, and we found out the extent of Google Stadia’s smartphone and tablet plan – or, more accurately, the lack thereof.

The fact remains that there are a few big problems Google Stadia faces before it can become the king of mobile gaming we thought it could be.

When it comes to portable devices, Google Stadia will only be available on Pixel phones – that’s the Pixel 3 and 3 XL, as well as the recent affordable alternatives the 3a and 3a XL. Presumably when the Pixel 4 and 4 XL launch in late 2019 they’ll be added to the roster too, so that’s six phones that’ll run Stadia.

Stadia will run on other phones at some point, but at the moment we’ve no idea when that mysterious date is. Google told us that they’d come “in the near future” but that’s all we’ve got. 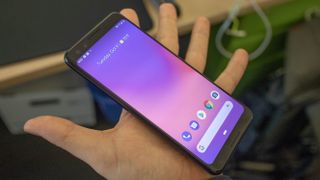 The Google Pixel 3 is not a huge phone. Image credit: TechRadar

Here’s the problem: Pixel phones aren’t ideal for complicated smartphone gaming, as they’re too small. Even though you’ll use the Stadia controller to play games, so your hands aren’t all over the screen obscuring your view, you’re looking at a tiny display which means all your information will be crammed into a small space, not ideal for playing intensive games.

The Pixel 3 XL has the biggest display of the four (although it’s possible the Pixel 4 XL will trump it) with its 6.3-inch display – there are many phones with much bigger screens, like the Huawei Mate 20 X, as its 7.2-inch screen is a whopping 0.9 inches bigger.

However that’s nothing like the huge screens you’ll be using if you play Google Stadia on your TV or computer.

Smartphones are growing ever bigger, and while it’s fine that the Pixel phones largely reject that trend, when you play games that aren’t designed for phones, it’s important to have as big a display as possible.

On top of that, there’s the question of 5G. In theory, cloud gaming is the perfect proving grounds for 5G, as it’ll let people stream intense games while out and about. 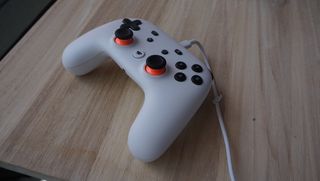 The Stadia controller is bigger than a smartphone. Image credit: TechRadar

However Google doesn’t have a 5G phone yet, and we’ve no reason to believe that it’ll launch one with the Pixel 4 line – these things are usually rumored way ahead of time. Unless Google surprises us with a Pixel 4 5G (which definitely doesn’t have a ring to it), we might not be able to play Stadia over data for quite some time, which would cause the platform to miss some of its most important functionality.

When we asked Google if it had plans for a 5G phone, or if it would allow Stadia to run on competitors’ 5G handsets, a spokesperson told us, “We are working to expand to more phones in the near future.”

At the moment it doesn’t feel like the Pixel phones are the right hardware for Google Stadia, and unless the Pixel 4 is a large departure from the Pixel 3, it may be worth waiting until Stadia expands before looking to it as a viable mobile gaming platform.

If you’re a tablet gamer, you’ll know how great these massive devices are for portable gameplay.

However the Google Stadia launch lineup doesn’t exactly have a breadth of game genres available – they’re nearly all action or shooter games, with a few wildcards thrown in too. There are no strategy, city builder, 4X games – in short, nothing that would be particularly suited to tablet gaming.

On top of that if, like phones, you need the Stadia Controller to play games on a tablet, the whole touchscreen element of the slates are lost, actually making these games harder to play on tablets – as ports of games that rely on console controllers are often more fiddly and annoying than when on their native PCs. 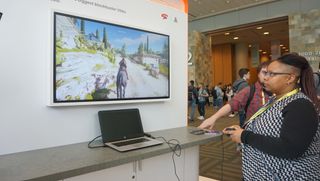 When we asked Google about the limited games list it’s bringing to Stadia on launch, a spokesperson said: “We shared the first set of games coming to our launch window and will have more content to announce later this summer. After that we will continue to work with publishers on announcing and bringing new content to Stadia.

“Furthermore, we will have more game-related news to share at Gamescom [and] more titles will be added to our launch lineup as publishers announce them in the future. We are committed to bringing all of your favorite games to the Stadia platform and will announce new titles on a rolling basis.”

It’s possible in the future that all your favorite non-action games, like Total War, Civilization, Anno and more will be playable on tablets, but it doesn’t look like they will be at launch. Instead the lineup consists of games that play better on consoles, which won’t be enough to sway gamers who like these games away from the PCs they play them on. 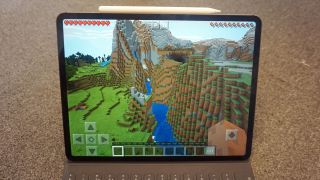 You won’t even be able to use many tablets as remote Stadia stations at launch, as Google told us “Stadia will also work on Chrome OS tablets including Google Pixel Slate”, so tablets running on Android and iOS, of which the majority are, will be forgotten for the beginning of Stadia’s life.

That makes sense – Google cancelled its tablet lineup recently, so clearly slates aren’t as important to it as its mobile lineup, but it’s still a shame for the hardcore mobile gamers who use tablets for their gaming needs.

Does this mean you should avoid Google Stadia?

The limited smartphone and tablet functionality for Google Stadia doesn’t mean the platform would be a bad purchase if you love playing games on the go – it just means it won’t necessarily be great at launch for mobile gaming.

As more smartphones and tablets become compatible, and particularly if touch controls become available instead of the Stadia Controller being necessary, they’ll be a more enticing option for your portable gaming.

Until things change, though, we think we’re going to stick to playing mobile games on our phones, and trying Google Stadia on a nice, big TV.