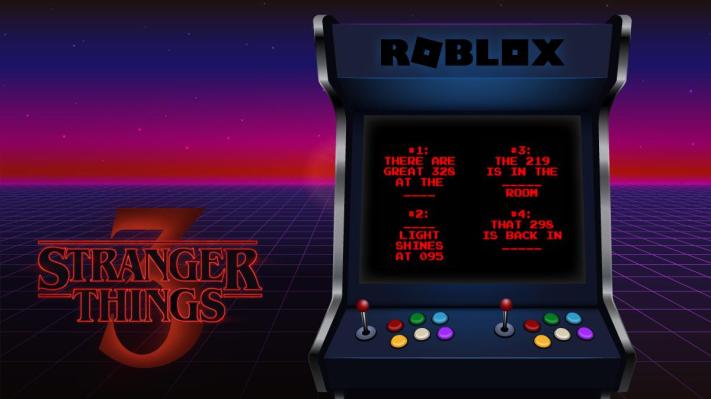 Netflix is bringing its hit TV show Stranger Things to Roblox. On Monday, Roblox announced the launch of limited-time, Stanger Things-themed items that will be made available to its over 90 million players, who can earn them by solving daily riddles and puzzles. Other free, limited-time items like a “Scoops Ahoy” hat and Demogorgon mask will also be offered as virtual items for players’ Roblox avatars.

The first of the two themed items are live now and will be free to download through July 12. Four more items can be unlocked by solving daily riddles and puzzles, with a new clue arriving each day ahead of the July 4 premiere of Stranger Things Season 3.

What’s interesting about the Roblox integration is that it may reach children younger than those ages 14 and up — the ages that the series itself is rated for (TV-14). (Likely, some braver tweens are already familiar with the show and are watching alongside mom or dad…or at least with their approval).

However, the Roblox partnership is only one of several gaming-focused initiatives Netflix has planned to market some of its most anticipated programming, including both Stranger Things and other titles.

At this year’s E3, Netflix detailed a series of gaming initiatives, including integrations with partners like Ubisoft, Behavior Interactive, and even Fornite, in addition to Roblox. Already, some Fornite players had found the “Scoops Ahoy” easter egg back when Season 9 launched, Netflix said.

Plus, the company is preparing not one but two new Stranger Things-themed games. The first, called Stranger Things 3: The Game, will launch across platforms including Nintendo Switch, Xbox One, PlayStation 4, PC, Mac, Android and iOS on the same day the third season premieres. Like its predecessor, also by developer BonusXP, the game is meant to be a companion to the current season and features 16-bit action for a nostalgic feel.

Next year, Netflix is planning another new Stranger Things title, with a mobile game for iOS and Android. This one is a location-based RPG/puzzler where players explore The Upside Down hidden all around them, while working with other players to “overcome its emerging evils.”

Netflix is also preparing to launch a turn-based tactics game adapted from the Netflix Original series The Dark Crystal: Age of Resistance, on Nintendo Switch, Xbox One, PlayStation 4, PC and Mac.

A wave of digital marketing isn’t entirely new for the streaming service.

In the past, it toyed with mobile experiences to advertise its shows — like the standalone Orange is the New Black app it launched back in 2014, or the “FakeBlock” app introduced to advertise the new season of Arrested Development.

The company also toyed around with a cross between games and TV with the 2018 launch of Minecraft: Story Mode, which some could consider a form of gaming. Netflix, however, did not. It even claimed at the time that the company did not have any plans “to get into gaming.”

While many of the integrations and games themselves are built by partnered developers, Netflix is clearly involved. And unlike the throwaways apps from years prior, these are more series efforts on Netflix’s part — not just promotional vehicles for its shows.

The marketing doesn’t stop at digital games either.

Netflix’s Stranger Things is more than just a show, its a whole business unto itself. It’s Baskin Robbins ice cream flavors, and Target exclusives like a Stranger Things bike, toys and apparel. It’s posters, games, and all kinds of other merch, too. And that’s just one show. An analyst previously said Netflix’s merch biz could be a billion-dollar addition to the company’s revenue.