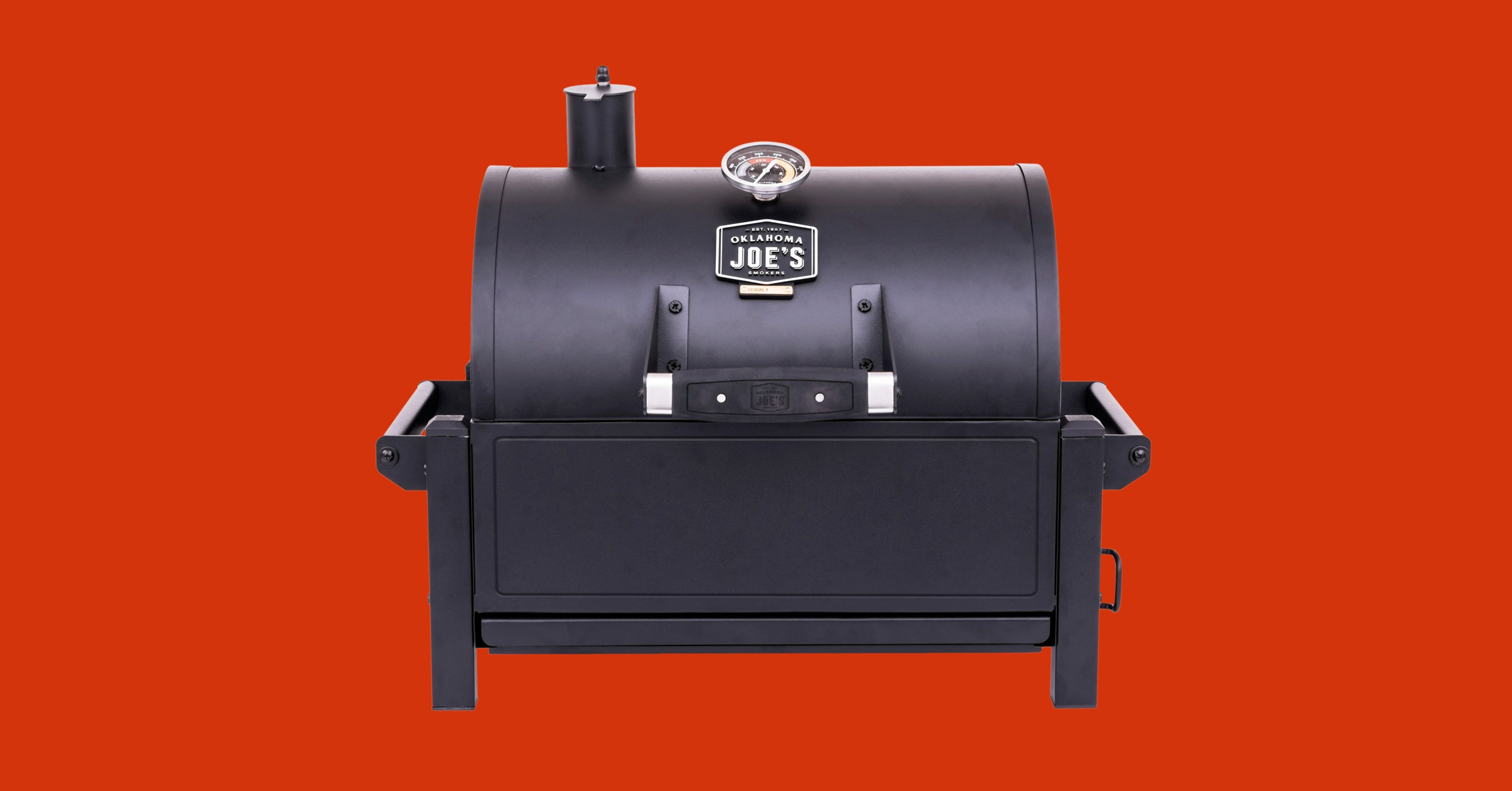 Nothing says summer like cooking over an open flame. Whether it’s the salty sweetness on that lightly charred freshly grilled corn or the rich smoothness of smoked meat, summer begs us to get outside and light a fire.

Sure, true grilling enthusiasts are outdoors checking the temp on their smokers even when the wind chill is in the single digits. For most of us though, the grilling season starts on Memorial Day and we really hit our stride around the Fourth of July. After those final Labor Day hot dogs are gone, the grill goes rolling back into the garage.

We’ve looked at full-size gas grills and charcoal grills in years past, but with the summer travel season in full swing we wanted to find the best ways to get your grill on wherever you go, so we researched and tested a dozen new grills to see which can brat the best.

Note: When you buy something using the retail links in our stories, we may earn a small affiliate commission. Read more about how this works.

Of the charcoal grills I tested, the Weber Jumbo Joe strikes the best balance of affordability, features, and ease of use. It’s big enough (18.5 inches in diameter) to smoke two racks of ribs, or fit burgers, and corn for six people (admittedly, this was crowded), but small enough that you’ll still have room in the trunk for a cooler and camping supplies. It’s one of the most versatile grills I tested—grilling, barbecuing, and smoking with ease. Thanks to its dual vent system (one at the bottom, one at the top), you get the same fine-grained level of temperature control you’ll find in Weber’s full size kettles.

It weighs 22 pounds and has a handle with a bar that fits over the top and keeps the kettle and lid together for easy carrying. I tossed mine in the back of our car for trips to the lake and the park; It never tipped over. The ash catcher at the bottom makes cleaning less of a hassle by allowing you to dump the excess without removing the grill grates.

The Jumbo Joe has a considerable following on the internet. Fans have hacked their grills to add thermometers, knobs to make it easier to open and close vents, added hanging ash cans, and come up with creative ways to cook taller items, like beer can chicken.

It’s not perfect, though. If you want to do any indirect heat cooking, you’ll want to buy the hinged grill grate for $25 so you can feed in fresh fuel without removing the top grill. The $17 charcoal basket is also useful and the Kettle Pizza Kit for $115 is fun, though more expensive than the grill itself. No thermometer is included and Weber does not make a storage cover for the Jumbo Joe.

Smaller Alternative: The Smokey Joe Premium costs $45 at Amazon and Walmart. This is our top pick for anyone who doesn’t need the larger Jumbo Joe. The downside to the Smokey Joe is you lose the lower vent of the Jumbo Joe, which means less temperature control. That’s not a huge deal unless you’re slow cooking, but it’s worth knowing. The Smokey Joe was also more difficult to clean out. Still, if you want a smaller kettle this is a good way to go.

If flavor is your only criteria, I would argue that charcoal is superior to propane gas. But flavor is rarely the only factor. We don’t grill in beautiful meadows under a rainbow every day. Often, we grill after hours on a Friday while we’re also trying to set up a tent, inflate a mattress, and wrangle hungry children. And that’s when the convenience of propane trumps charcoal.

For those times, your best bet is the Weber Q 1,200. It’s big enough for a family of four and strikes the best balance between ease of use and cooking performance. It has a thermometer and some side tables to put your plates and tongs. It’s also a champ at keeping a constant, even heat in pretty much any condition. A storm blew in one afternoon, but I kept grilling despite the high wind and rain. It just kept on cooking.

It’s also good at minimizing flare ups. To test this I marinated some chicken in lemon juice and olive oil and laid it on the grills. Every grill flared somewhat, but the Q 1,200 (and the Coleman below) have heavy enameled cast iron grates that are closed over the actual burners, which helps keep the flaring under control.

The main downside is its weight. It may be totally unfazed by weather, but it’s heavy. The $80 wheeled stand is worth a look if you plan to transport it a lot. Other nice accessories include the griddle for $45 and a nice storage cover for $16.

Smaller Alternative: The Weber Q 1,000 costs $179 at Amazon and Home Depot. It’s nearly identical to Weber’s Q 1,200, but loses the thermometer and side tables. The result is a more compact, though still heavy, grill. If you don’t need the tables and want to save a few dollars this is a good option.

For couples and small families looking for the convenience of propane, the Coleman Roadtrip 225 Portable may work better than a Weber. It’s considerably lighter and mostly matches the Weber Q 1,200. Coleman also gives you the option to use only one burner to grill a couple burgers without draining your propane gas tank, and with variable controls you can sear veggies on one side while cooking meat more slowly on the other side.

There’s a grease pan to catch drips while cooking, and it’s removable for cleaning. You also get push button ignition and 11,000 BTUs of propane grilling power. What the Coleman lacks is a thermometer and a latch on the lid so you can carry it one-handed, though these omissions don’t stop me from recommending it.

Coleman has accessories that let you use half the stove as a griddle or regular stove burner so you can simmer beans while you grill hot dogs. We didn’t test the accessories, but the $35 Griddle and $35 Stove Grate both get high marks in other reviews around the web.

Our top charcoal pick, the Weber Jumbo Joe, is a capable smoker, but it’s not large enough to squeeze in more than two racks of ribs—and even those will need to be cut in half. Oklahoma Joe’s Rambler has a rectangular design lends itself to longer cuts of meat like ribs.

Oklahoma Joe’s is well known for its full size smokers, but the Rambler is a relatively new effort to bring the power of the full size smoker to the table top. The result is mostly successful. It has a built-in thermometer, large dampers to control temperature, and is the most solidly constructed of all the grills here, by far.

Getting the Rambler ready for your first cook takes more work. It has the most complex assembly of these grills, and you’ll need to season the cast iron grill grates, but the results are worth it. I barbecued and smoked up some wonderful results with this grill, including some really nice smoked cauliflower I wasn’t able to duplicate on the others.

The downside to the Rambler is that it’s heavy at 49 pounds. If you’re just going from car to picnic table that’s not a big deal, but if you’ve got a decent walk, say down the bluffs to the beach, the Rambler is tough to carry alone.

Oklahoma Joe’s Rambler costs $149 at Oklahoma Joe’s, $180 at Tractor Supply, $150 at Academy Sports & Outdoors, and Amazon (Not always in stock)

Cooking over extremely high infrared heat is different than typical grilling. It took me a few failures—neither or which I can attribute to the grills—before I got the hang of it. The theory is simple: heat a ceramic element with flame and then let the radiant heat from the element do the actual cooking. It’s not a crazy unique concept, but “infrared” certainly makes it sound like science fiction.

When you’re in a hurry to get dinner on the table, infrared cooking is your friend. Hook up a propane tank (yes, needed), fire it up, let the heating element get to temp (about five minutes) and you have a grill capable of 500-600 degree searing. Veggies need 30 seconds a side and have beautiful grill marks. Thin steaks like flank or skirt take a mere minute or two per side and turn out incredibly juicy and flavorful.

The best infrared option I tested was the Char-Broil X200. Char-Broil calls its infrared “TRU Infrared” and claims that it eliminates flare-ups, which is almost true. It flares less than I would have expected, and the flares don’t last long, but if you get something good and juicy on there—marinated chicken or brats for instance—it’ll flare. Like the Weber Q 1,200, the X200 is well built. It’s sturdy yet only weighs 20 pounds, and the lid locks tightly.

The downside to the X200 is that it can get too hot. It’s difficult to do anything but sear. Turning it down means the flame, which is tiny to begin with, tends to get blown out by the slightest breeze. This is appears to be a problem with infrared in general, not just the X200. I had the same problem with the Solaire option mentioned below. Still, despite that flaw, infrared will spoil you. Want to grill some veggies a few minutes before dinner is supposed to be done? With the X200 that’s no problem.

Alternative: The Solaire Anywhere Grill costs $389 at Amazon. I enjoyed this grill and its ceramic heating surface works much better than the X200’s metal surface, but even a slight breeze from the front can blow out the burners, and because the infrared flame is so small to begin with, you might not notice that your flame is gone right away. I liked everything else about the Solaire, but it’s a tough sell at this price.

The terms “grilling” and “barbecue” are often used interchangeably, which is fine, but if you get serious about cooking over flame you’ll want to learn the distinction: “grilling” usually means cooking directly over high heat, while “barbecue” typically refers to cooking over indirect heat for longer periods of time. You grill steak. You barbecue ribs.

I used both methods to test, grilling everything from steak to salmon to corn, even kale. This recipe for grilled kale is my go-to for testing how hard it is to clean a grill. It’s delicious, and incredibly messy.

For the charcoal options I also barbecued ribs and pulled pork. I have not tried brisket yet, but I do believe it would be possible to do a smaller piece on the Weber Jumbo Joe or the Oklahoma Joe’s Rambler.

The ubiquitous disposable green propane bottle is convenient, but a huge source of pollution. It’s illegal in many jurisdictions to throw them in the trash, though that doesn’t stop many people it seems, given how many of these turn up in landfills every year. Don’t be that person. There are re-fillable bottles available, which I suggest using if you must have the smaller size canister.

If you have room, the far better, and even cheaper, way to go is a small re-fillable propane cylinder for $55. Cooking outdoors over both stove and grill three meals a day, this tank lasts me about two weeks. It’s small and light enough to not be any more difficult to cart around than the four-to-six 1-pound bottles it replaces.