This is the clearest Samsung Galaxy Note 10 leak yet

A new Samsung Galaxy Note 10 Plus photo has leaked out, this one giving us a look at the top of the phone ahead of its official launch on August 7 – as well as a look at the Galaxy Watch Active 2.

This early look comes courtesy of notable leaker Evan Blass, and the phone it depicts matches the Note 10 rumors we’ve heard before – especially the renders that came out a couple days ago that gave us a first look at the larger Galaxy Note 10 Plus.

This image gives us an overhead look from the top of the Note 10 Plus, which shows the long-rumored central front-facing selfie camera and insight into the phone’s design. The MicroSD/SIM slot is still there in the same spot as in the Samsung Galaxy Note 9, though the microphone hole seems more centered.

Much more interesting is the flat top, unlike the rounded corners of the Note 9. The new phone is a much flatter pancake-esque handset, but that should stretch the screen to its maximum dimensions.

Blass followed up the Note 10 Plus look with another leak – this one for the Samsung Galaxy Watch Active 2.

This look follows hot on the heels of another official-looking render that came out mere hours ago; that one featured a leather-looking band, while Blass’s features the more familiar rubberized wristband from the original Samsung Galaxy Watch Active – but both have the same circular watch body with two buttons on the right. 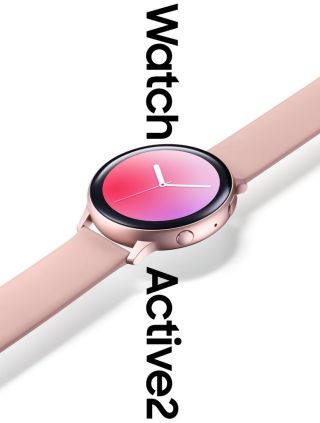 In the case of both of Blass’s leaks today, we’re more confident of their authenticity given his reputation as a dependable source of official content.