Leaks and speculation around the Google Pixel 4 continue to ramp up ahead of an expected October launch, and the latest unofficial update comes in the form of a leaked screen protector photo showing the phone’s front bezel and array of sensors.

The leaked image comes courtesy of prolific tipster Ice Universe and so is more likely than not to be the real deal – though nothing is certain until Google’s official unveiling. 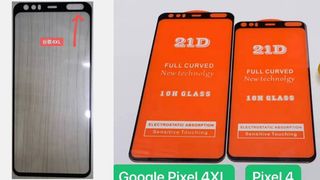 You can see on the photo that there are spaces for the dual front-facing camera, the speaker, and presumably some kind of extra facial recognition sensor. There’s also a larger cut-out on the right hand side to consider as well.

This might well house the small radar sensor that Google is supposedly working on, and which would let you control your phone with hand gestures without touching the screen. It’s one of the more intriguing Pixel 4 rumors we’ve heard so far.

We also have new renders to show you courtesy of @OnLeaks and iGeeksBlog, showing off the smaller Pixel 4 phone. These renders are based on what’s leaked out so far and what Google has already told us.

The large rectangular housing for the rear camera is in evidence again, and you can see the thicker forehead bezel on the front of the phone as well. We’re expecting the phone to arrive with a 5.6-inch screen. 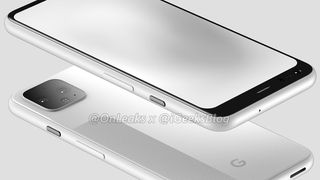 What remains to be seen is whether the phone will feature the Snapdragon 855 Plus, like the Asus ROG Phone 2 is going to. It might be one way that Google can steal some attention back from Apple ahead of the iPhone launch in September.