I’ve put enough hours of my life into The Witcher 3: Wild Hunt, but its debut on Nintendo Switch may mean I have to pick it up and travel to The Continent again.

After 92 hours of monster hunting, romancing and playing Gwent, I don’t need to return to this game only a few years after finishing it, but there’s one key reason why I may buy it again – and that’s the DLC.

I’ve been lucky enough to play around an hour of the game’s Nintendo Switch port, and that short burst of The Witcher’s world has encouraged me to return and play through both Hearts of Stone and Blood and Wine.

Both DLC packs sit waiting at home for me on my PlayStation 4 – well, after I reinstall the 50GB+ game – as I’ve already bought them before. 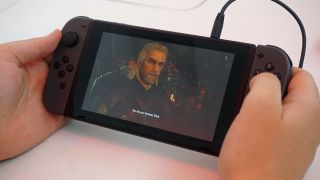 I loved the ending of the main story, and something about how long I’d spent in that world meant I wasn’t desperate to pick up the controller again and dive into those DLC storylines, even though they were ready and waiting.

How Long To Beat, a game aggregation website that estimates the length of games, says Hearts of Stone takes between 10 to 19 hours to complete, while Blood and Wine takes between 15 and 40 hours depending on how much you want to do.

That’s another big undertaking in itself, so maybe the Switch is how I’ll finally find the motivation to do them. I commute for over an hour a day, and the idea of being able to finally dive into these mammoth DLCs that themselves are longer than your average console game is an exciting one.

So far, my testing time has proved The Witcher 3 on Switch is still a fantastic experience. 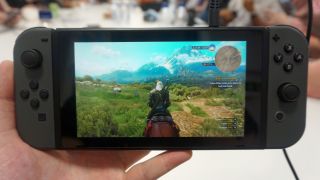 It runs smoothly, although those load times are obviously still long, but I found it graphically looked similar to the original game despite its lower resolution.

This is likely to look much better on your TV – although it’s only 720p – as it’s running 540p in the handheld mode.

It still looks beautiful in this play style, but it’s obviously not the optimum way to play The Witcher 3. If you want that, you’ll want it on a top-end PC but the trade-off in power for portability is something I’d be willing to make.

If you’ve never dived into The Witcher 3, or you want a new way to play one of the largest and most sprawling video games in recent memory, then there’s likely no better way to do that then at the back of a bus with the Switch in your hands.

So far I’ve only had the opportunity to play the game while it’s undocked, so I’m excited to see how it performs on a TV. But the whole reason this port is exciting is because you’re able to take this adventure out into the world for the very first time.

The Witcher 3 on Nintendo Switch is the full package too. Everything is sat there waiting on the 32GB cartridge, and that includes both the extra DLCs I’ve mentioned as well as all the other free upgrades that were provided for the game after launch.

If you want the full experience from the very beginning, this may be the way you can finally get it. CD Project Red hasn’t dropped any missions, any elements of the story or Gwent to make this work.

Despite how much I loved it, I’m not clamoring to pick up Geralt’s main adventure again but I think I’m finally ready to experience the final chapter that I’ve somehow managed to avoid for so long.