Kentucky Fried Chicken goes beyond chicken in partnership with Beyond Meat 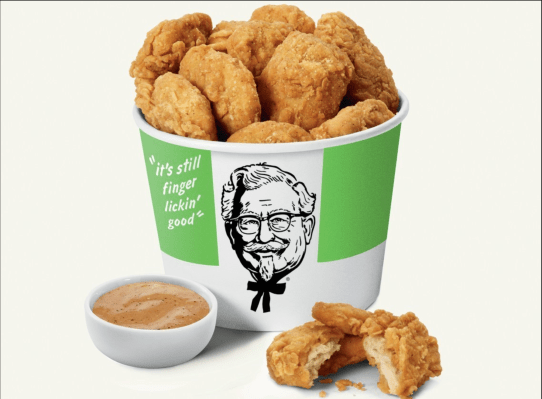 Kentucky Fried Chicken is going beyond chicken with its latest partnership.

As other chicken chains vie for chicken sandwich dominance, KFC is doing its bit for the planet and taking its first fledgling steps to move beyond the chicken coop with a plant-based chicken nugget in partnership with Beyond Meat.

The first nuggets are going on sale at a single restaurant on August 27th in Smyrna, Ga.

KFC has already experimented with vegetarian offerings outside of the U.S. In the U.K. the company has an “Impostor Burger” on the menu that’s made from mushrooms and was developed with the English vcompany, Quorn.

Beyond Fried Chicken’s one-day-only offer from KFC is significantly different from the month-long citywide rollout that Burger King did for the Impossible Whopper (its Impossible Foods menu item) earlier this year. But it comes as most fast food chains are trying to come to grips with rising consumer demand for vegetarian alternatives to traditional menu items.

“KFC is an iconic part of American culture and a brand that I, like so many consumers, grew up with. To be able to bring Beyond Fried Chicken, in all of its KFC-inspired deliciousness to market, speaks to our collective ability to meet the consumer where they are and accompany them on their journey. My only regret is not being able to see the legendary Colonel himself enjoy this important moment,” said Ethan Brown, founder and CEO, Beyond Meat, in a statement.

Chicken is one of the next battlegrounds for the alternative protein purveyors, although they’re not just looking at plant-based chicken substitutes. Companies like Memphis Meats (and, reportedly, Just) are working on lab-cultured meat cultivated from animal cells.

News of KFC and Beyond Meat’s challenge to conventional chicken chains sent Beyond Meat’s stock price up more nearly 6%, or $8.28 per share, to close at $155.13.