The Honor Vision is the first smart TV from Huawei’s Honor subdivision. While it’s competitively priced, the television’s big draw is inside: it’s the first device to run HarmonyOS, Huawei’s cross-platform operating system.

Given the buildup around HarmonyOS, especially as an alternative phone operating system should the US-Huawei tensions lead to a permanent ban from Android, it’s clearly the most intriguing ‘feature’ of the Honor Vision and slightly pricier Honor Vision Pro that are available exclusively in China.

TechRadar got a first look at the newly-named Honor Vision during a press tour of Honor parent company Huawei’s Shenzhen, China campus, and it looks unique – thanks to its 55-inch UHD screen, and built-in camera. Yes, the ‘Pro’ version of Honor’s TV has a lens that pokes out the top of the screen (and retracts when not in use for privacy), enabling casual video chatting in the home.

It seems well suited for the Chinese market, however, it’s hard to predict whether it will appeal to consumers abroad. Here’s what we thought.

Unfortunately, however, both Honor Vision models are only sold in China at the moment, and we’re unsure if or when it will be sold abroad. The company is waiting to evaluate its reception and gauge worldwide demand before deciding which market to move on to next, Honor told TechRadar. 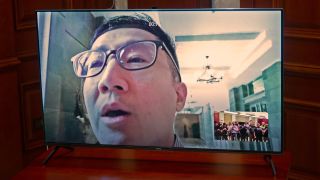 Chatting with an Honor employee through his Honor phone.

At first glance, putting a camera in a TV seems like a weird move – but it’s actually at the center of Honor’s strategy for the Vision.

As we were shown, the camera allows folks to make video calls to anyone with a Huawei account. This is actually a big usability roadblock, as it’s easiest to get an account with a Huawei or Honor phone, though you can also use it in a browser.

Still, when we saw Huawei employees use the TV interface to call another employee with a Huawei phone, there weren’t any hiccups. Some features hadn’t been activated yet, like switching from landscape to portrait by rotating the participant’s phone (it stayed in landscape), but it was definitely one person on a TV contacting another person on a phone using just data.

That seems a bit over-the-top to a Westerner – why would you need to video chat with a massive 55-inch screen outside of, say, a corporate environment? But one Huawei employee explained that this use case appeals to Chinese consumers because their culture strongly endorses close families living in multigenerational homes. When living apart, the Honor Vision helps those at home (older family members, generally) to easily chat up distant relations.

That feature might be less appealing to Western consumers, but for the privacy-minded, the camera does retract completely when not in use.

The camera’s performance doesn’t seem too impressive (Huawei hasn’t released its exact specs, aside from 1080p HDR resolution), but it’s sharp enough for casual conversation. The lens can also tilt down up to 10 degrees – a one-time adjustment on setup in case the Honor Vision has been mounted high up on a wall.

The most promising tech might be the TV’s NPU chipset, which enables facial recognition, body tracking and gesture detection. Those don’t have too many uses now, but they could be integrated with future apps and services. 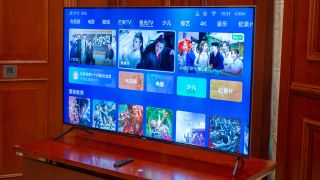 HarmonyOS, previously known by its codename HongMeng, is an operating system that theoretically could be used for phones, tablets, televisions, and more – much like the still-unreleased Google Fuchsia.

Google’s decision to temporarily block Huawei devices from getting Android updates shocked the Chinese company into claiming its new OS – now known as HarmonyOS – could be adapted for use in its smartphones. But given how entrenched Huawei and Honor devices are in the Android ecosystem, it makes sense for the companies to endeavor to stay with Google’s mobile operating system.

Especially because the HarmonyOS we see today can’t run a phone – not yet. It runs fine on the Honor Vision – at least, it runs as well as other good smart TV operating systems, with moderate smoothness and speed. Sadly, the bar is so low that a slight delay in commands is de rigueur.

The interface’s home screen looks much like that of other smart TVs: a row of media categories (films, shows, etc) up top with subcategories below to browse. Click through those, and you’ll find individual media to sift through.

But otherwise, the HarmonyOS-powered interface in the looks a lot like other Chinese smart TVs. Media content in each category populates downward, as opposed to the infinite horizontal scroll in Western platforms like Netflix. There’s also a notification ribbon at the top displaying notifications and messages in a scrolling marquee.

Aside from all the fancy bells and whistles, the Honor Vision is, indeed, good for watching media. The 55-inch UHD screen displays in 4K, and supports 87% NTSC wide color gamut with up to 400 nits of brightness. That’s a bit on the low side, obviously, but that makes sense given its price.

The TV packs HDR for better color saturation as well as motion-sharpening tech like Motion Estimate and Motion Compensation (MEMC), which helps eliminate motion blur in fast-moving videos. For audio, the Honor Vision Pro has six 10W speakers (four full range, two ultra slim high-frequency units), while the regular Honor Vision only has four speakers. It also has six microphones that pick up sound from up to 5 meters away, mostly to use in tandem with the camera for video chatting. 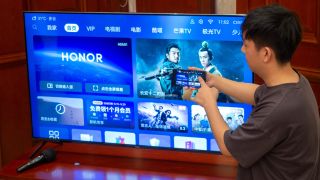 But what you can do is start screen-sharing from your smartphone to the Honor Vision through a new feature called Honor Magic Link. While you’re scrolling through photos or playing a game – or just want to use your phone as a remote control – tap your device near a special sticker to port it up on the big screen via DLNA/Miracast standards, without even requiring an app.

We saw an Honor employee beam a game of PUBG to an Honor Vision, and while the 100ms latency might be too slow for any sort of competitive player, it was good enough for spectators to appreciate. 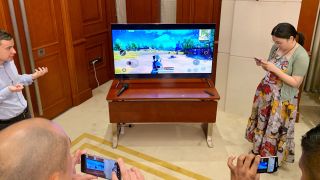 The other cool feature? Want to tell a loved one you’ll be home later, or just tell a relative you’re thinking of them? You can also send messages to an Honor Vision TV – it’ll appear in the ribbon marquee, and users can see the full content in a dedicated Information Sharing Center. These messages are sent using Huawei Share, which is only available on phones with EMUI – which means this feature is limited to Huawei and Honor phones for now.

It’s hard to forecast how the Honor Vision will do, as there are certainly cheaper smart 4K TVs available in China. Xiaomi, for example, has a big share of that market with five years’ head start selling cheap smart TVs.

But as a pioneer of HarmonyOS, the Honor Vision could be something of a staging ground for the multi-platform operating system, integrating new apps and products before Huawei and Honor release additional devices running HarmonyOS. Its importance might not be appreciated until years down the line – especially if politics force Huawei to develop its OS into something that truly rivals iOS and Android.