While we’ve heard rumors of unusual camera arrangements and curvy screens, not much information has been divulged about the handsets’ specs. That said, we’re fairly certain that the Kirin 990 chipset announced at IFA 2019 will probably power the Huawei Mate 30.

Now, an alleged spec sheet for the Mate 30 Pro has leaked online via Twitter courtesy of Finnish SlashLeaks contributor @RODENT950.

Curiously, the specs sheet lists the Huawei Mate 30 Pro as having a 6.6-inch or 6.8-inch (which one is it?) AMOLED ‘Waterfall’ display with a 1,176 x 2,400 Full HD+ resolution, suggesting an apparent step down in quality from the QHD+ screen featured on last year’s Mate 20 Pro.

The leaked specs sheet also notes the Mate 30 Pro will carry 8GB/12GB of RAM and up to 512GB of storage, along with the aforementioned Kirin 990 chipset and an enormous 4,500mAh battery with 40W ‘SuperCharge’ and 27W ‘SuperWirelessCharge’ capability.

Like we’ve reported previously, the Huawei Mate 30 Pro is said to sport four cameras on its rear, with a 40MP main sensor to be accompanied by a 40MP wide angle lens, an 8MP telephoto lens and a Time of Flight (ToF) camera sensor to round it all out. On the front, the Mate 30 Pro will supposedly feature a 32MP main selfie camera and an additional ToF sensor.

Surprisingly, the leak states that the Mate 30 Pro will feature Android 10 (via Huawei’s own EMUI10), albeit without Google apps.

Additionally, leaked images have arrived on the Chinese social media website Weibo which convincingly show the the retail box for the standard Huawei Mate 30 (not the Mate 30 Pro, to be clear), with a second image revealing a unit with 6GB of RAM and 128GB of storage. 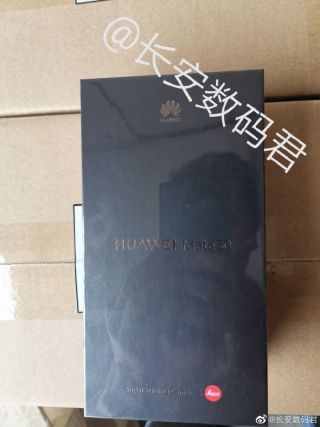 Of course, you should take all of this information (particularly the spec sheet) with a grain of salt for the time being, as none of it has been confirmed by Huawei. That said, we won’t have to wait much longer for official details, as the Mate 30 range will launch next week on September 19.