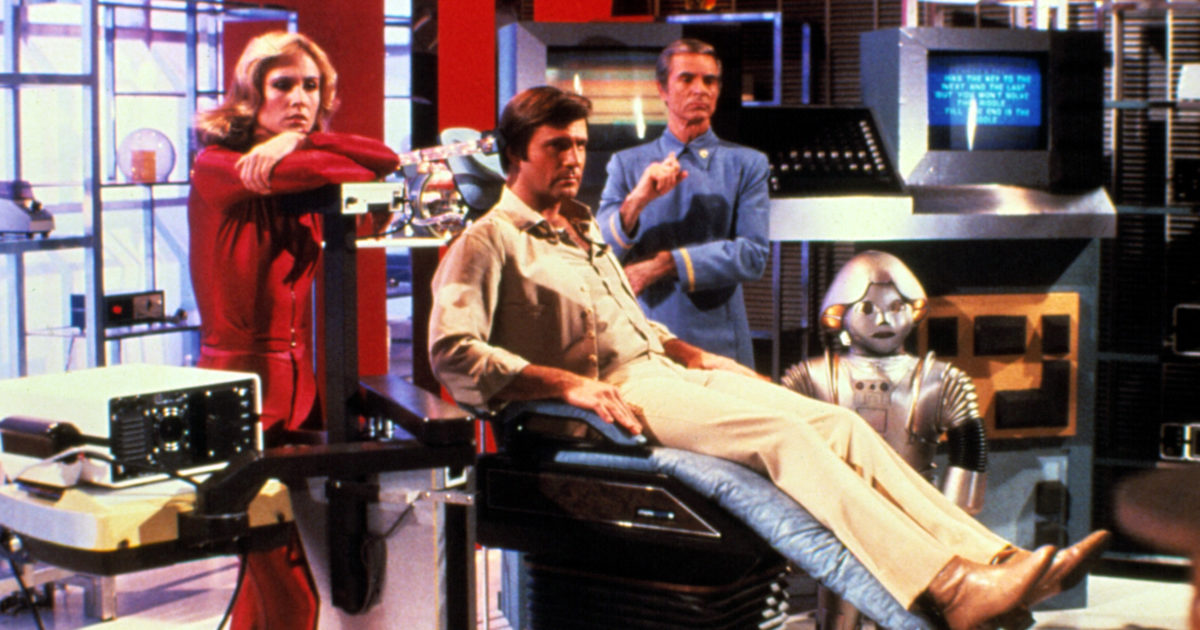 Science fiction fans who grew up in the 1970s and ’80s have fond memories of movies such as Zardoz, Buck Rogers in the 25th Century, and The Ice Pirates. But author Matthew Kressel warns that returning to those movies now can be a shock.

Today humor writer Tom Gerencer finds Buck Rogers embarrassingly bad, but back in the ’70s science fiction films were so scarce that he was excited by any examples he could find.

“I went to see Buck Rogers in the theater, and I was like, ‘Sweet! Another Star Wars movie,” he says. “I was 10 years old, so I was like, ‘Yeah cool, there’s lasers and stuff, and there’s pretty women, and it’s kind of like a James Bond movie.’”

TV writer Andrea Kail remembers loving The Ice Pirates, but now finds that many of its plot points—such as the hero kidnapping an unconscious woman—are uncomfortable in light of modern sensibilities. “It’s definitely not as hilarious as I remember it,” she says. “It did not hold up. It did not stand the test of time.”

It can also be jarring to remember just how low-budget ’70s and ’80s science fiction movies actually were. Geek’s Guide to the Galaxy host David Barr Kirtley notes that it was common for movies to reuse footage from other films, such as a shot from Logan’s Run that appears in The Ice Pirates.

“I think the big takeaway here is that these movies—some of them, depending on your taste—can be a lot of fun, but we’re very fortunate to be in an era where you don’t see shots from another movie plugged into something you go to see in the theater,” he says.

Listen to the complete interview with Matthew Kressel, Tom Gerencer, and Andrea Kail in Episode 378 of Geek’s Guide to the Galaxy (above). And check out some highlights from the discussion below.

“This is another one of those where my much-older brother was like, ‘Oh, you’ve got to watch this movie. It’s really an epic, classic science fiction movie.’ And I was like, ‘Really? How did I miss it?’ I watched it as a teen on TV, and was thoroughly mystified by it. It disturbed me back then, and watching it again now it disturbed me again, 40 years later. One of the first lines in the movie is, ‘The gun is good, the penis is evil.’ But what struck me is they edited out the ‘penis is evil’ line on TV in the 70s, but not ‘the gun is good.’ So that was kind of an interesting thing. My overall impression is that this could have been a good movie, but it just went too far. It had a lot of good concepts, and a lot of good things about it, but they just went way too nutty and wacky on a lot of stuff.”

“I absolutely love it, and it’s hard for me to [explain]. When I hate a movie, I can go on for hours about what I think is wrong with it. But when I love a movie, it’s hard to say why. I can’t talk about the structure because I’m so pulled in by the film that I’m not looking at that, I’m laughing out loud at the jokes, at the absurdity of it. It’s just a fun movie, and I guess if you don’t—I’m going to say this and it’s going to sound bad. I don’t mean it to. But if you don’t get it, you don’t get it. … Look at all the stuff that Flash Gordon does wrong. I mean, there’s so much wrong about that movie, but it’s so entertaining. To me, this is as entertaining as Flash Gordon.”

“It’s in the future and all of the water planets have been destroyed, and so water has become an incredibly scarce commodity that’s now more valuable than gold, and there’s this evil order of Templars that control the remaining water supply, and they transport the water as giant blocks of ice. And so then there are ‘ice pirates’ who swoop in and steal the water from them. As a kid I just thought it was so cool, this idea that water could be the most valuable commodity. … This movie is 9 percent on Rotten Tomatoes, so you have to go into it with appropriate expectations. It was made in 1984, and you have to look at it through your 1984 glasses or you’re not going to enjoy it at all, but I still think it’s really funny.”

“A couple times, like with The Ice Pirates, I was like, ‘Oh yeah, I definitely remember this differently.’ Buck Rogers—like I said I was so excited to watch that show as a kid, and now I just really can’t stand most of it. But it’s still kind of cool to go back and revisit that stuff, and see how they were obviously taking things from many decades in the past and re-envisioning them, and you can see how this is influencing stuff down the line. … I also feel that watching these movies that are gloriously bad makes you appreciate the movies from that period that are really good. You look at these, and then you compare them to movies that you like of that era, and you can really see how they stand out.”