Apple didn’t launch iPadOS as soon as we expected, but the release date is still only weeks away – it’s coming September 30.

At Apple’s event in early September where it unveiled the new iPhone 11, iPhone 11 Pro and iPhone 11 Pro Max, as well as the Apple Watch 5 and new entry-level iPad, we expected Apple would also launch its new operating system updates like iOS 13 and watchOS 6. That’s when we anticipated to see iPadOS launch, too, but it wasn’t even mentioned.

However, Apple did update its website with the news that iPadOS will be released on September 30, so you’ll be able to download it then. It’s coming a bit later than the now-live iOS 13, which means Apple Arcade won’t be available on iPads until iPadOS becomes available.

The new operating system is a big change for Apple, which finally committed to splitting the the iPad’s software from the iPhone’s OS it had run on since the tablet first came out.

If you want to get an early look, the public beta for iPadOS has been open for a while.

We have a list of the best iPadOS features you’ll be able to experience when the new software rolls out. It “builds on the same foundation as iOS,” according to Apple, but expect iPadOS to grow more into its own operating system over time.

iPadOS brings a variety of critical improvements to the tablet UI. Some of these make better use of screen real estate while others introduce new gesture controls (and even mouse support) for a better tablet experience. In short, iPad users won’t just run an upsized iOS any longer.

Apple has confirmed through its website that iPadOS will be available to download from September 30 – that’s a little later than iOS 13.

That means the new iPad Pro, which we’re expecting to see launched in mid-October, should come with the operating system pre-installed.

The iPadOS public beta release date landed on June 24, and it contains a lot of the features Apple shows us at its WWDC 2019 keynote. Since then, Apple has pushed a new version out to enrolled tablets, with iPadOS public beta 2 made available from July 8. From there we’ve had the first iPadOS 13.1 public beta, as the new changes move forward ahead of the impending ‘full’ release.

Which iPads will work with iPadOS?

Apple has confirmed that the “iPad Air 2 and later, all iPad Pro models, iPad 5th generation and later, and iPad mini 4 and later” will all get the iPadOS update when it releases later this year.

So which iPads are missing out this year, after getting iOS 12 in 2018? Well it’s the end of the update road for the original iPad Air, iPad Mini 2 and iPad Mini 3. It’s unclear if older iPads will be getting iOS 13 or if they’ve been completely left behind.

(As a reminder, it’s always best to avoid using the beta version of software on a primary or daily-use device, as there can sometimes be erratic elements within the system  – wait until the final version lands in the near future.) 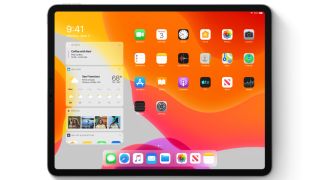 The first big change over you’ll notice in iPadOS is on the new home screen. The grid of app icons is tighter, allowing you to fit more on the screen and reducing the amount of dead space on the display.

With a tighter grid of apps, there’s now an option to show Today View alongside them, for a more useful overview screen.

It can be added to the Home screen for quick access to widgets with a simple swipe from the left side of the screen, and you can switch out the widgets pinned here to display the ones most relevant to you.

Sidecar is a big new change

If you’re wondering what the biggest feature of iPadOS might be, Sidecar is a real contender. It natively bakes in wired (or wireless) support for using your iPad as a Mac second screen, bringing with it a whole host of functionality.

This mode effectively turns any iPad into a portable monitor, one with a powerful internal battery, allowing apps and multiple windows to be dragged onto its screen and interacted with using a mouse, keyboard or Apple Pencil.

You can’t mess around with the resolution just yet, so you can’t work in super fine detail and may want to wait a little while until the final software launch appears in late September – but even at this early stage, Apple fans will find they’ve suddenly got a new screen for their Mac right in another pocket of their backpack.

iPadOS has a new way to multitask 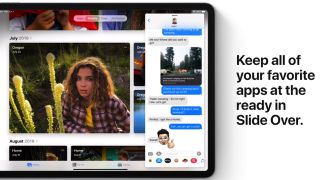 Slide Over in iPadOS in action, with a side view of Messages over Safari. Image credit: Apple

Multitasking also gets an upgrade on iPadOS is a few ways.

First up, you’ll be able to use Split View to see two app windows at a time for the same app, or two different apps. iPadOS uses a drag-and-drop interface here, making switching between apps and windows easy.

Slide Over lets you quickly pull up an app in a side window, over the top of another app – allowing you to quickly check things such as emails, messages or reminders without having to exit the current app you’re using.

Dragging up from the bottom of the screen will allow you to move between apps in the Slide Over panel.

Apple has also brought the Mac’s Exposé feature to iPadOS, allowing you to get an overview of all your open apps – making it easy to jump between them, and close down any you no longer need running in the background. 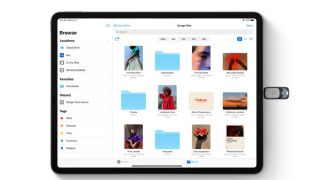 External storage fans rejoice! iPadOS will allow you to plug a USB drive or SD card reader into your iPad, and the Files app will be able to read the plugin and allow you to easily manage data between the iPad’s internal storage and the external drive.

Files gets a Column View to better take advantage of the iPad’s wide screen, and the iCloud Drive allows folder sharing, and will show content from a USB drive or SD card if they’re plugged in.

There’s good news for photographers too, as support is being built into iPadOS to allow you to plug your camera into your iPad and import images directly into editing apps such as Lightroom.

Your current iPad could get a performance boost when iPadOS arrives, with Apple claiming that its tablet-specific operating system is quicker than iOS 12.

It says Face ID unlocks are up to 30% faster, while apps launch up to twice as fast as on iOS 12 – and apps themselves should be smaller in download size (by up to 50%), taking up less of that precious storage space.

Desktop-quality websites and browsing on iPadOS 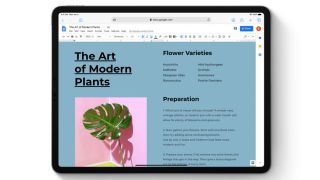 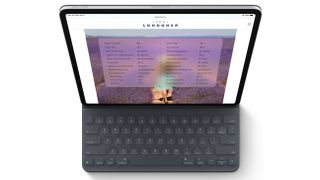 The Safari web browser is also improved with iPadOS, because it’s no longer purely tied to iOS and a mobile ecosystem.

It doesn’t just work with Apple’s websites either – the likes of Google Docs and WordPress web apps will also work better with Safari on iPadOS.

One of the bigger features across the whole of iPadOS are the new gestures. The ones we’ve seen are pretty simple: three-finger pinch to cut, three-finger splay to paste, three-finger swipe to undo. Easy.

In some apps, you’ll also be able to two-finger-pinch the keyboard to shrink it to iOS mobile size and move it around. Plunk it next to the side of the screen and boom: you can type on it with one thumb.

Add to that the new gestures for the home screen and multi-tasking, and there may be a learning curve required to get used to all the new interactions which come with iPadOS.

Markup and much more on iPadOS 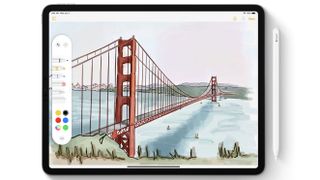 The new tool palette for the Apple Pencil, which can be dragged anywhere on the screen. Image credit: Apple 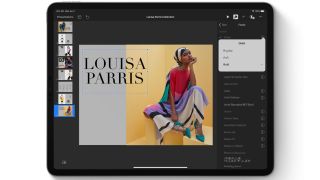 Markup also gets an update, and you’ll be able to mark up entire web pages, documents and emails.

A simple swipe up from the corner with your Apple Pencil launches markup and brings up the newly-redesigned tool palette, which can be dragged around and repositioned anywhere on the screen.

And speaking of the Pencil, Apple has reduced the latency of its input from 20ms to 9ms, which means you’ll get a more natural, pen-like experience when using it.

Plenty of new features that are coming to iOS 13 are also headed to iPadOS, like Dark Mode, custom fonts, the new Photos organized by machine learning, and the SwiftKey-like slide-and-type QuickPath keyboard feature.

iPadOS does supports connecting a mouse to your iPad, though it’s not something you’ll find front-and-center on the official iPadOS features list.

Developer Steve Troughton-Smith initially tweeted out instructions he’d discovered to connect a mouse through new Accessibility settings, and Tom’s Guide successfully activated a mouse on an iPad. While it doesn’t seem to be the smoothest thing, we’re excited for a serious leap in the iPad family’s productivity potential and accessibility.