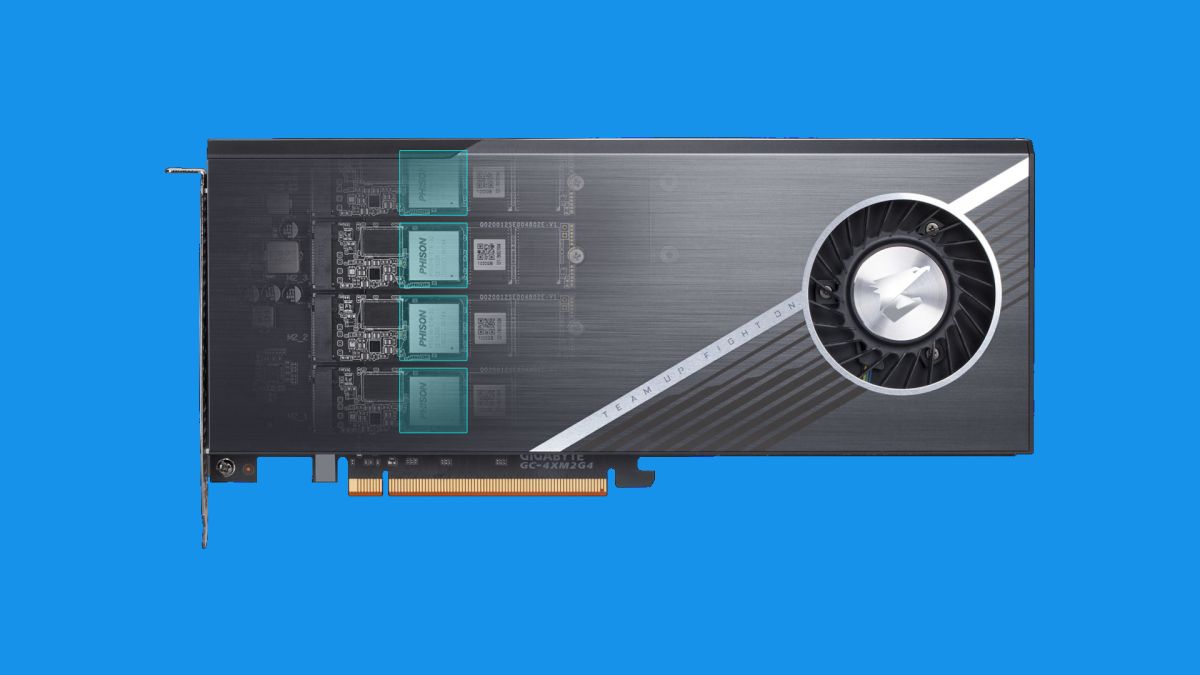 After showing off its new Aorus Gen4 AIC at Computex earlier this year, Gigabyte has officially unveiled its new quad-SSD PCIe 4.0 adapter card.

The card itself is designed to house up to 4 NVMe SSDs and it functions as a multi-way M.2 adapter that allows four SSDs to run from a PCI 4.0 x16 slot. The Aorus Gen4 AIC also includes an active cooling system to help the drives run at consistent speeds even while under high loads.

Gigabyte has outfitted the device with four 2TB m.2-2280 SSDs based on Phison’s PS5016-E16 controller as it is the only client SSD controller with a PCIe 4.0 x4 interface.

To keep the card cool, the company has equipped it with a sophisticated cooling system made up of a large copper heatsink, a 5cm ball bearing fan, a baseplate and eight thermal sensors that monitor the drives temperatures. Aorus Storage Manager software is used to monitor the device and it can also configure the card’s cooling with a silent, balanced and performance operating mode for the fan.

The card’s performance is certainly impressive but there is a huge potential downside. AMD’s Ryzen 3000 is the only platform that supports PCIe Gen 4 and the company’s CPUs only support 24 PCIe 4.0 lanes with x16 available for an add-in-card, x4 available for an NVMe SSD and X4 to connect to the chipset.

This means that to make full use of the Aorus Gen4 AIC SSD 8TB, users would have to give up their motherboard’s only PCIe 4.0 x16 slot for the SSD and would not be able to use a dedicated graphics card. While this may be okay for some workloads, graphic designers, video editors and others who need dedicated graphics to do their jobs won’t be able to take full advantage of the new card.

However, the Aorus Gen4 AIC SSD 8TB would be a perfect fit for a workstation using AMD’s EPYC 7000-series processor as it has up to 128 PCIe Gen 4 lanes.