Apex Legends could finally be getting cross-play that will allow PS4, Xbox One and PC players go head-to-head in the Battle Royale.

That’s according to a recent leak by reliable dataminer That1MiningGuy (via GameRant), who found ‘Nucleus’ strings in Apex Legends’ code that suggests developer Respawn Entertainment has found a way to standardize player identification across Xbox One, PS4 and PC.

This would allow players to match-make across these three major platforms, likely through their Origin login – something the game hasn’t supported to date.

Check out the tweeted leak below:

I’m not 100% convinced we’ll see it soon, but did want to show that I found some handling for cross network play using something called Nucleus – also looks like they have a way to standardize the Player Identification across platforms? pic.twitter.com/MpIWgjkvFSSeptember 23, 2019 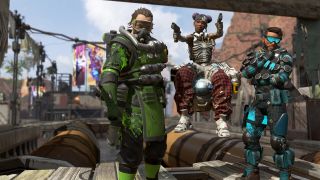 Not only does this leak suggest that cross-platform play is coming to Apex Legends, it hints that cross-progression could be on the way too.

Cross-progression allows players to continue their progress across a range of platforms so, for example, you would remain the same level in Apex Legends on PS4 as you are on PC.

That1MiningGuy points to player PINs found in the game’s code. These PINs are used to track a player’s performance in a game. The fact that this code is mentioned beside both the platform identification and the “Nucleus” string we seen previously suggests that Respawn Entertainment is also looking into cross-progression.

It’s always worth taking these leaks with a pinch of salt, but it would make sense for Apex Legends to finally implement cross-play and cross-progression, especially as competitor Fortnite already boasts these features.

Even if this leak is to be believed, we don’t expect cross-play or cross-progression to land soon, but fingers crossed it’s something we will see in the future.