Subscribe to The Financial Brand via email for FREE!
Not surprisingly, Anne Boden, founder of the U.K. digital bank Starling, is a booster of the mobile banking experience. She considers what mobile banking is today to be just a small subset of what it could be.

Boden sees the mobile device as a sort of portable pocket banker, a miniaturized advisor drawing on a multitude of apps that cover every aspect of a consumer’s financial life.

She does not see the extinction of banks that others do. She actually sees a kind of rebirth for banks at the intersection of mobile banking, open banking, data sharing, and other trends. Boden sees banks as active clearinghouses and curators.

“To visualize how this works, I always imagine a good quality market such as you might find in any town or city center near you,” writes Boden writes in her book The Money Revolution. “This is a place where individuals and small businesses come to sell foodstuffs, from excellent coffee to fine cheeses…. In the future, it is very likely that banks will take the market role, bringing together financial brands and services that they are likewise proud to be associated with them.”

In the book Boden notes that Starling, founded in 2014, already has more than two dozen partnerships with third-party providers offering everything from personal insurance lines to savings to investments and wealth management.

“I predict we will see many more models like this emerging over the next few years as banks understand their new role at the core of a customer’s relationship with money,” writes Boden.

For people in today’s banking business, this is a breath of fresh air, compared to the voices that predict the marginalization — or even disappearance — of traditional banks and credit unions. To fit into this vision of the industry’s evolution, however, requires a state-of-the-art mobile banking capability.

There’s wide variance in mobile banking capabilities by region. In the U.S., indications are that there is some way to go, towards having mobile banking play the central role as described by Boden. Progress has been made, and there’s an abundance of thinking about what can be done to hasten the progress, but as a report by Entersekt recently stated, “On mobile, we’re not quite there yet.”

“The convenience of self-service banking and digital payments has enticed tens of millions of Americans to change how they bank and pay for goods and services. A sizeable percentage are regular users of their banks’ mobile apps,” states Entersekt in its report on mobile banking usage trends. “Still, many Americans don’t have banking apps or do not identify as regular users.” The report notes that researchers have found, too, that many mobile users still use their apps for only the most basic functions.

The company notes that of all U.S. adults surveyed, 92.9% own mobile devices, a staggering statistic by itself. However, only 70.6% describe themselves as regular users of mobile banking apps. All told, the study found that one in four American adults with mobile devices have never used a mobile banking app, with a handful whose institutions still don’t offer one.

As shown in the chart below, the numbers, relative to the whole, indicate both cause for optimism and cause for thinking about how to draw more users into the active fold. 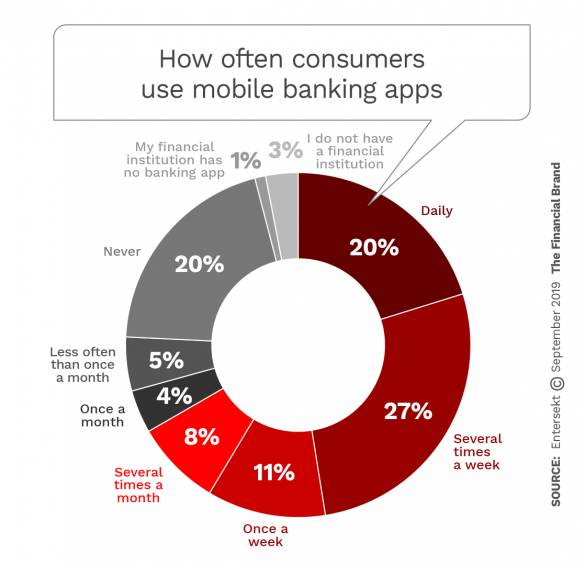 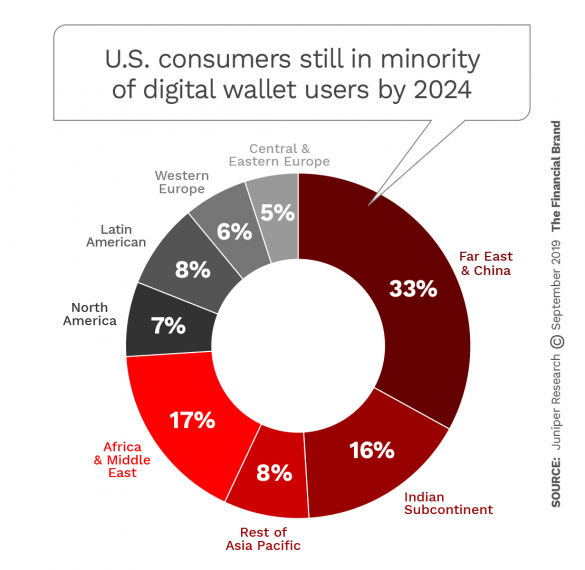 Presently, according to research by Forrester among a large sample of Americans, online banking still outpulls banking on mobile devices by a wide margin. 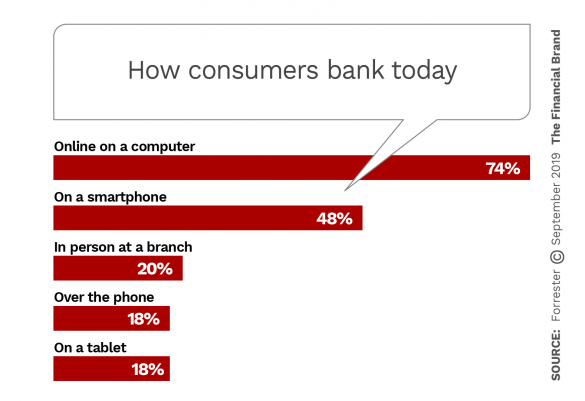 Part of the solution lies in marketing — showing consumers what they have to gain by going mobile.

“Many non-users do not believe that banking apps provide anything they don’t already have on the desktop,” Entersekt’s report states. “Even regular users may not be as engaged on the channel as they could be.” 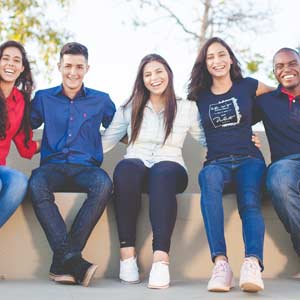 REGISTER FOR THIS FREE WEBINAR

Gen Z is Here: 6 Tips to Drive Engagement with the Next Generation

Join EVERFI for a webinar exploring Gen Z financial attitudes and behaviors, as well as the six key tips for brands to engage with this growing consumer base.

What Should Institutions be Offering in Mobile Banking?

Financial institutions looking to increase usage of their mobile apps need to consider who their target consumer is, and will be.

For example, for younger generations, a white paper from the International Center for Monetary and Banking Studies, makes it clear that they want it all:

“The functionality, design and experience of a mobile banking application can be the deciding factor for a mobile native customer …. Firms that are able to master a strong mobile-first or mobile-only experience can significantly decrease onboarding times, lower conversion costs and decrease long-term customer acquisition costs if they can market to the customer inside a highly targeted mobile environment.”

Clarity of use is something that transcends generational lines, and it may not actually take much research to tell if people are connecting with the app that a bank or credit union offers.

“If a bank branch has customers coming in regularly to ask how to use certain features of the app, then it’s clearly due to poor banking app design and bad usability,” writes user-interface designer Joseph Downs in a blog discussing tips for mobile banking look, feel and navigation.

More specifically, Entersekt’s research found that greater ease of use and more innovation in design would improve how many consumers feel about the mobile apps that their financial institutions provide. 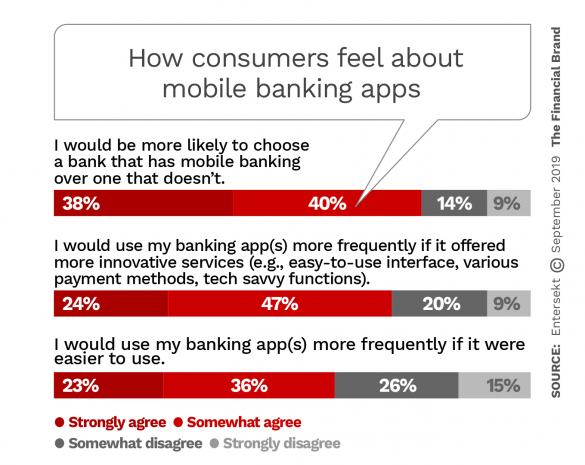 “Almost all traditional retail banking functionality can now be accessed at any time, from anywhere, all in the palm of the hand,” Entersekt observes. “Still, few consumers would point to financial services as the exemplar of on-demand convenience.”

One thing that consumers surveyed by Entersekt say they would like is apps that give them greater control. One way that applies is more information that can be acted on in the moment, rather than having an app that’s a rear-view mirror.

For example, the company found that four consumers out of five would like to be told before they make a mobile purchase if going through with it will impact their credit score.

All Things to All Consumers? Or a Single Simple Channel?

It’s not unusual for consumers to have so many apps on their phones that the organized ones organize them into folders and subfolders. Research has shown that of all that code crammed into the phone, consumers typically make the most use of just a handful.

That’s just a third in both cases that have more than one app for the purpose.

“Juggling so many apps,” the Entersekt report states, “it’s not a surprise that a majority of regular banking app users find the idea of an all-in-one banking and payments app attractive.” The research found that 68% would prefer to handle their finances through a single banking and payment app, and 67% say that they would be less likely to use cash or physical credit cards to make purchases if they had a single, unified app.

“The lure of an all-in-one combination app is stronger among younger adults (18 to 44 years) who regularly use banking apps,” the study also found, indicating potential welcome for the type of central role for a digital, new-model banking institution as envisioned by Anne Boden. “Just over three-quarters (76%) want one, compared to only half of those aged 55 and over.”

The look and feel of mobile banking apps can’t be overemphasized. The hard launch of T-Mobile Money, the T-Mobile venture with Customers Bank’s BankMobile in 2019 and the Apple-Goldman Sachs partnership with the Apple Card are seen as examples of how much design will matter.

“Both Apple and T-Mobile have strong, well-known brands and they have large customer bases, and customers have strong connections to their brands,” says Alyson Clarke, Principal Analyst, Forrester, in a video blog. “That’s the key reason bankers should be concerned. Banks usually don’t have a strong emotional connection to their customers.”

In addition, Clarke says that financial institutions must “lift their game. Both Apple and T-Mobile are changing product design.”

In his blog, Joseph Downs provides several tips that financial marketers can see as a starting place:

That last point, of course, means the bank or credit union must make it possible to reach somebody. Actually, as admired as the likes of Amazon are, it’s a safe bet that anyone who needs to reach a real person at a bank or credit union stands a better chance of finding one than with an ecommerce company.