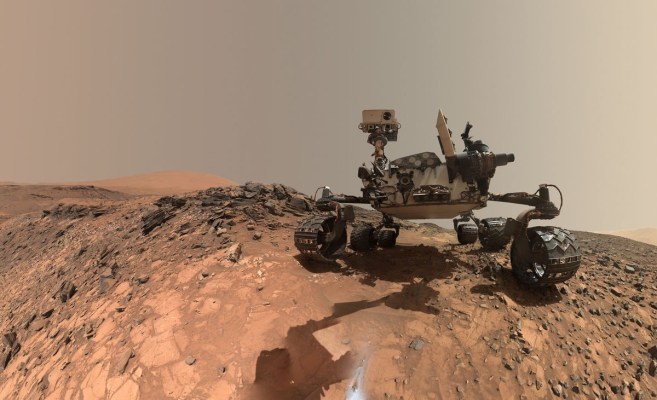 On its latest trek through the Gale Crater on Mars, the Curiosity Rover has discovered evidence that’s leading . scientists to believe that there was an oasis at the base of that 150-kilometer-wide crater.

Curiosity scientists described the scene in an article in “Nature Geoscience” published earlier this week. Researchers analyzing data from the Rover are extrapolating from the data that rocks enriched by mineral salts are evidence of briny ponds that went through periods of drying out and overflowing.  Those deposits serve as a watermark made by climate fluctuations as Mars’ climate changed from a wet one to the current frigid ice desert it is today.

The next step in their research is for scientists to understand how long the transition took and when it happened, according to a statement from NASA’s Jet Propulsion Laboratory in Pasadena, Calif.

The Gale Crater is the leftover geological formation from an impact that changed the surface of Mars. Eventually water and wind filled in the crater and the hardening sediment, carved by wind, created the Mount Sharp geological formation that the Curiosity Rover is scaling right now.

The Rover is taking samples of each layer as it climbs and sending that data back to reveal new information about the environment on Mars over time, NASA said.

“We went to Gale Crater because it preserves this unique record of a changing Mars,” said lead author William Rapin of Caltech, in a statement. “Understanding when and how the planet’s climate started evolving is a piece of another puzzle: When and how long was Mars capable of supporting microbial life at the surface?”

Rapin and his co-authors found salts across a 500-foot-tall section of sedimentary rocks that Curiosity first visited in 2017. The “Sutton Island” salts suggest that water had collected in pools across the formation in addition to the intermittent very dry periods that the scientists had already discovered.

Scientists speculate that the geological formations may have resembled the salt lakes in South America’s Altiplano. Streams and . rivers flowing . from mountain ranges lead to similar basins as the Martian terrain. And those lakes are similarly influenced by climactic changes.

“Finding inclined layers represents a major change, where the landscape isn’t completely underwater anymore,” said Team member Chris Fedo, who specializes in the study of sedimentary layers at the University of Tennessee. “We may have left the era of deep lakes behind.”

Future missions will see Curiosity driving toward more inclined layers to investigate rock structures. If they formed in drier conditions, that may mean a new phase of development for the crater — and reveal still more secrets about life on Mars from millions of years ago.