HBO is upping its game when it comes to the mental health of its viewers, with pre-episode content warnings that provide them with links to mental health support services – particularly if the TV show in question depicts potentially triggering content.

Called “bumpers”, the onscreen slides are to be introduced before episodes of TV shows such as The Sopranos, Girls, Barry, and Euphoria, as part of an internal initiative to break down stigma around mental health – presumably both for live broadcasts on HBO’s TV channel and its HBO Now online platform (via Variety).

HBO’s VP of brand and product marketing, Jason Mulderig, says that “HBO has always been at the forefront of telling stories featuring complex characters, some of whom deal with mental illness, from The Sopranos to Euphoria, encouraging more conversation around the different facets of mental health.”

It’s also a neat nod to World Mental Health Day – October 10, and today at the time of writing – a time when people the world over are encouraged to speak and share their experiences and struggles with mental illness.

Why is this significant?

While it’s a common sight to see trigger warnings / content notices in advance of a TV show or movie, they usually act as a heads up for what will be depicted in the show, rather than providing information on how to handle similar conditions and illnesses in real life.

Those warnings are also usually left to ratings boards like the Motion Picture Association of America (MPAA) or British Board of Film Classification (BBFC), with more nuanced information being down to the production studio itself – such as the content warnings introduced for 13 Reasons Why, a year after the show first landed, or the disclaimer at the start of Netflix’s new show, The Politician, “for those who struggle with their mental health” (in image below). Proactive action by HBO itself, for either TV broadcasts or on demand streaming, wasn’t a given. 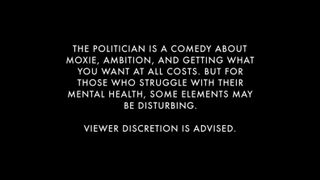 Netflix’s The Politician is streaming now

While no broadcaster or content provider should shy away from difficult themes – and while those of us struggling with mental illness certainly want our experiences represented – it’s easy to use mental illness as a way of upping dramatic stakes without thinking about how it affects (or reflects) the lives of viewers.

A small change, to be sure – but it’s heartening to see HBO think about the well being of its user base.

HBO is a US-based TV provider, though you can access its shows through Sky Atlantic in the UK.