It wasn’t too long ago that Apple apologized for sending recorded Siri conversations to third-party contractors in order to better train its voice assistant, inadvertently handing out sensitive information in the process. Now, Apple aims to fix that with new sharing options appearing in the latest development beta.

While the voice recordings were anonymized, concerns were raised that the data given to these contractors would make it relatively easy to identify the subjects of the conversations and, hence, their private information, so the program was halted.

In the second developer beta for iOS 13.2 that was made available today, Apple has addressed the issue by introducing an option to opt out of sharing any recorded audio data, along with the ability to delete your whole Siri history.

When upgrading to iOS 13.2, users will see a pop-up message that actively offers them the aforementioned ability to opt-out of “allowing Apple to store and review audio of your Siri and Dictation interactions”.

It also mentions that you will be able to change this setting later on in the Privacy settings of your iPhone, and this can be found in the “Analytics & Improvements” screen. 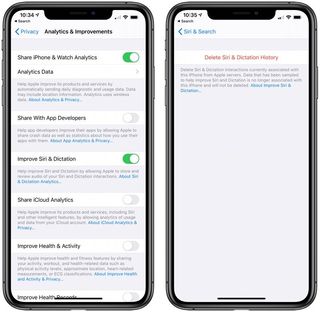 As an added precaution, Apple is also moving away from using third-party contractors entirely and will be restricting any human interactions with audio recordings to its internal staff, as well as revising the type of data they’ll have access to.

The latest iOS 13.2 beta is currently only available to developers, but we expect a public beta and full rollout won’t be too far off.