Few phones have ever leaked in advance quite so completely as the Pixel 4 has, and of course Google itself got the ball rolling early on. We’ve got some more specs and images to share with you, plus details of a deal we haven’t heard about before.

First some high-quality renders of the phones courtesy of tech tipsters Ishan Agarwal and Brandon Lee: these match up with previous pictures we’ve seen but show off the phone in a high-resolution and in all three colors.

According to Lee, that coral or orange color we’ve been seeing for a few months is actually a limited preorder exclusive – so if you want it you’re going to have to act fast. As yet though, that’s unconfirmed.

Agarwal has also leaked a chart suggesting the Pixel 3a and the Pixel 3a XL will remain on sale, as you would expect, with the 2018 Pixel 3 phones retired.  You can see the specs for all four phones in the chart. 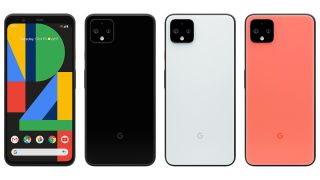 More leaks come courtesy of Best Buy in the US, via 9to5Google, with promo images attached. As we’ve heard before, the Pixel 4 gets a 5.7-inch screen, the Pixel 4 XL gets a 6.3-inch screen, and both cameras get 16MP+12MP dual-lens rear cameras.

9to5Google has also been able to uncover code in the Google One app that suggests anyone who buys a Pixel 4 will be able to get some free cloud storage from Google for three months – that might be another reason to make a purchase.

Meanwhile, if you order a Pixel 4 from the Three network in the UK, you’ll apparently get an HP Chromebook 14 for your troubles as well – that’s as per an image of a billboard posted to Reddit and reported by Android Central.

All will become clear on Tuesday October 15 when we finally get the grand unveiling of the Pixel 4, the Pixel 4 XL and quite possibly some other devices too – and we will of course be bringing you all the announcements as they happen.