Baldur’s Gate for Nintendo Switch is a dungeon master: CRPG port is magical

“There’s no way Baldur’s Gate is going to work on Nintendo Switch,” was the general consensus in the TechRadar office when Skybound Games and Beamdog announced they were porting a selection of classic PC role-playing games to Nintendo’s handheld.

Thankfully, our doubts were unfounded – from Baldur’s Gate to Planescape Torment, these ports are magical.

For the uninitiated, Skybound Games and Beamdog have been working together for some time reviving yesteryear’s isometric PC RPGs from the likes of Bioware and Black Isle Studios. Building up ‘enhanced editions’ of Baldur’s Gate 1 and 2, Icewind Dale, Planescape Torment and Neverwinter Nights, these remasters took the hassle out of installing and enjoying the older titles (some over 20 years old) on PC, as well as on new mobile platforms.

But one place had eluded them, and that was the console space. Until now that is, with both Baldur’s Gate games, Icewind Dale and Planescape Torment now available on Nintendo Switch, PS4 and Xbox One, with Neverwinter Nights to follow in November.

It was the Nintendo Switch version that caught our eye those many months ago when the ports were announced: these are text-heavy games built with a keyboard and mouse in mind – how could they possibly work on a relatively small handheld device?

Remarkably well, is the answer.

Obvious care has gone into making the CRPG ports as accessible as possible. For the first time, for instance, you’ll have direct control over your party of adventurers with the left analogue stick, controlling the pan of the map with the right stick.

Party control is brought up with a press of the left bumper, with the right bumper bringing up access to inventory, character menus and the like. Hold the A button and all interactable objects in the vicinity are highlighted – point your avatar towards one, release the A button and they’ll head on over. You can also turn on cursor-based control by with a push of the D-Pad, letting you use the stick to direct the pointer rather than giving you locomotive control over the sprites themselves.

And as for all that text, it’s incredibly readable on the big screen, and more than comfortable on the Switch’s portable display thanks to adjustable font sizes.

Now, it’s got to be noted that, despite the best efforts made here by the remasters’ developers, each game still feels more at home with a keyboard and mouse. There are many menus to trawl through, smallish sprites to target, and reams of text to scroll past. With so many UI features to remap to a pad, it can take some time before the revised controls feel intuitive. Some of the graphical options don’t translate well to undocked Switch play too, with the 2D backdrops sometimes suffering from a strange shimmering effect when in motion. 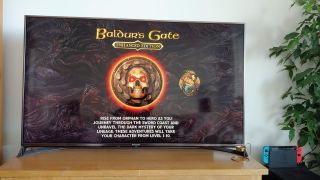 But what’s lost in mouse-clicky input is made up with by flexibility. There’s key appeal to having these games as fully-functional on-the-go titles. Sure, tablet and mobile editions exist, but they require imprecise touchscreeen controls that could tire over time and obscure the action on screen. But with the Switch’s portability, you’re able to clock up hours in these lengthy adventures while travelling, and then seamlessly bring the experience to your bigscreen TV for armchair play.

As for the games themselves, there’s much that’s been written about why they’re timeless classics. Let us point you to our colleagues over at PC Gamer for their definitive verdicts on the PC versions of the titles now expertly ported to Switch:

For some, the slower nature of these Dungeons and Dragons inspired titles mark them down as relics of a bygone age, superseded by the more accessible RPGs they inspired. But with portable console play now possible, anyone who has been previously tempted by the much-lauded history of the games has no excuses to prevent giving them a try.