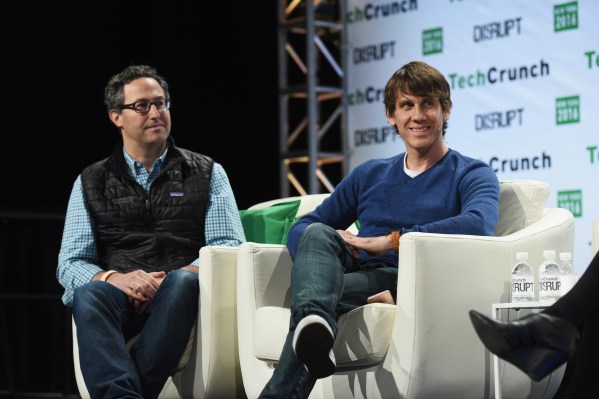 The chief executive of Foursquare, one of the largest location data platforms on the internet, is calling on lawmakers to pass legislation to better regulate the wider location data industry amid abuses and misuses of consumers’ personal data.

It comes in the aftermath of the recent location sharing scandal, which revealed how bounty hunters were able to get a hold of any cell subscriber’s real-time location data by obtaining the records from the cell networks. Vice was first to report the story. Since then there have been numerous cases of abuse — including the mass collection of vehicle locations in a single database, and popular iPhone apps that were caught collecting user locations without explicit permission.

The cell giants have since promised to stop selling location data but have been slow to act on their pledges.

“It’s time for Congress to regulate the industry,” said Foursquare’s chief executive Jeff Glueck (shown on the left in the photo above) in an op-ed in The New York Times on Wednesday.

In his opinion piece, Glueck called on Congress to push for a federal regulation that enforces three points.

Firstly, phone apps should not be allowed to access location data without explicitly stating how it will be used. Apple has already introduced a new location tracking privacy feature that tells users where their apps track them, and is giving them options to restrict that access — but all too often apps are not clear about how they use data beyond their intended use case.

“Why, for example, should a flashlight app have your location data?,” he said, referring to scammy apps that push for device permissions they should not need.

Second, the Foursquare chief said any new law should provide greater transparency around what app makers do with location data, and give consumers the ability to opt-out. “Consumers, not companies, should control the process,” he added. Europe’s GDPR already allows this to some extent, as will California’s incoming privacy law. But the rest of the U.S. is out of luck unless the measures are pushed out federally.

And, lastly, Glueck said anyone collecting location data should promise to “do no harm.” By that, he said companies should apply privacy-protecting measures to all data uses by not discriminating against individuals based on their religion, sexual orientation or political beliefs. That would make it illegal for family tracking apps, for example, to secretly pass on location data to healthcare or insurance providers who might use that data to hike up a person’s premiums above normal rates by monitoring their driving speeds, he said.

For a business that relies on location data, it’s a gutsy move.

But Glueck hinted that businesses like Foursquare would be less directly affected as they already take a more measured and mindful approach to privacy, whereas the fast and loose players in the location data industry would face greater scrutiny and more enforcement action.

“These steps are necessary, but they’re not sufficient,” said Glueck. But he warned that Congress could do “great damage” if lawmakers fail to sufficiently push overly burdensome regulations on smaller companies, which could increase overheads, put companies out of business and have a negative effect on competition.

“There’s no good reason that companies won’t be able to comply with reasonable regulation,” said Glueck.

“Comprehensive regulation will support future innovation, weed out the bad companies and earn the public trust,” he said.