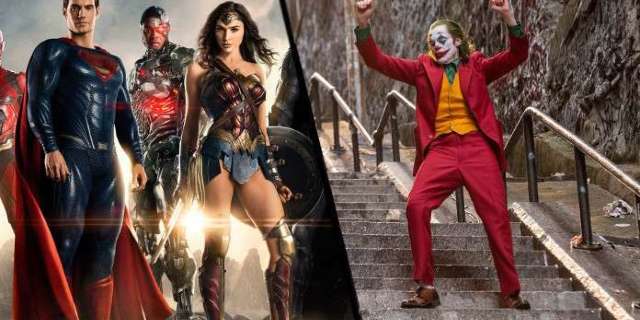 Joker is finally the DC Comics villain who beat the Justice League. Todd Phillips’s R-rated Joker movie has outgrossed the 2017 blockbuster Justice League movie at the global box office. Justice League ended its global box office run with a $659 million gross. Joker is expected to cross $700 million worldwide later today. That also puts Joker past Logan, Man of Steel, and soon It. Domestically, Joker is likely to overtake Justice League within the next week. Justice League‘s domestic total climbed to $229 million. Joker’s domestic total is currently $218 million and still rising. The film has a shot at becoming the highest-grossing R-rated film of all time if it continues with the momentum it has now.

Joker passed the $200 million mark at the domestic box office in 11 days. The film set a new record in its second weekend at the box office, earning $55 million to top the box office charts again, blowing past more conservative projections that had pegged for around $40 million. That’s the biggest second weekend for a film in October in box office history, surpassing Gravity‘s $43.1 million in 2013.

In its opening weekend, Joker‘s $96 million broke the October opening record set by Venom in 2018 when it debuted to $80 million. Joker also broke Venom‘s October Friday box office record by earning $39.8 million on its first day in theaters. It was a career-best opening for director Todd Phillips, whose previous high opening was The Hangover 2‘s $85.9 million, and an opening weekend record for star Joaquin Phoenix, whose previous high mark was $60.1 million for Signs in 2002.

Joker is already the highest-grossing Warner Bros. release of the year at the global box office. “Not only did Joker over-perform in North America, but also internationally where the acclaim, buzz and controversy surrounding the film resonated strongly with moviegoers who put the film at the top of their cinematic priority list,” Comscore senior media analyst Paul Dergarabedian noted. “Movies that become part of the general conversation due to their controversial nature are often those that transcend their status as a movie to become a cultural event and this is exactly what happened with Joker.”

The film is proving polarizing with critics. ComicBook.com’s Brandon Davis calls the film a masterpiece is his 5-star review, writing, “Whether or not Joker is a social commentary on issues such as poverty or mental illness, a new and mysterious take on the best known DC Comics villain, or just another unforgettable piece of cinema which producer Martin Scorsese is attached to, you’ll need to see to believe it and, even then, you still might not believe it.”

How do you feel about the box office success of Joker? Let us know what you think about it in the comments. Joker is now playing in theaters.