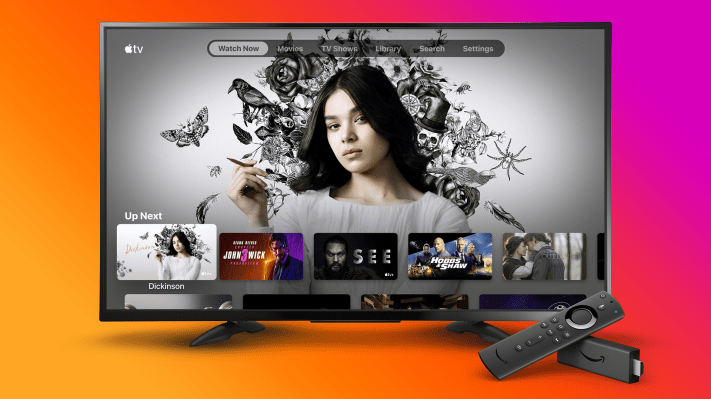 Ahead of the launch of Apple TV+ on November 1, Apple’s Apple TV app has begun to roll out to other platforms beyond Apple’s own streaming media player, Mac computers, and iOS devices. Earlier this month, for example, the app arrived on Roku devices. Today, it’s hitting Fire TV Stick and Fire TV Stick 4K.

Fire TV Basic Edition customers in over 50 countries will also be able to find the new app in the Amazon Appstore on their Fire TV. Though not yet available, the app will launch soon on Fire TV Cube (1st and 2nd Gen.), Fire TV (3rd Gen pendant design), plus Toshiba and Insignia Fire TV Edition smart TVs, and Nebula soundbar.

While the app is necessary for being able to stream from Apple TV+, that’s not all it does.

Within the Apple TV app, you’re also able to access your iTunes library, including any shows or movies you’ve purchased or rented. However, if you want to buy or rent something new, you’ll need to do so from an Apple device first in order to have the content show up within the app.

For Apple to have an app available on Amazon’s platform at all took years of negotiations.

As Apple’s interest in the world of streaming media and related devices grew, it also had to acknowledge that its walled garden approach needed to be set aside. In 2017, Apple CEO Tim Cook finally announced that Prime Video would come to Apple TV. Since then, the two companies have eased up on their restrictions against each others’ products.

The following year, Amazon expanded its assortment of Apple inventory to include other devices besides Apple TV — like iPads, iPhones, Apple Watch and Beats headphones. It also brought its FreeTime Unlimited app to iOS, while Apple Music arrived on Echo devices.

This March, Apple Music launched on Fire TV, as well.

And with Apple TV+, Apple is even more of a rival to Amazon, which runs its own streaming service, Prime Video.

Apple, however, has a smaller lineup for Apple TV+ with shows like Dickison, The Morning Show, See, For All Mankind, and others. It’s unclear how well these series will perform with audiences, but Apple is giving away a year of access to its service with the purchase of new Apple devices. That gives it time to find its footing, even if several of its first tries bomb.

Amazon says it will announce, via Twitter, when the Apple TV app is released for other devices.