The Matrix is real, and it’s everywhere. Or, at least, it might be in the near future with Microsoft tinkering with new VR technologies once again.

Using virtual reality, Microsoft is seeking to change the idea of the daily commute by immersing VR users in a virtual world as they walk through real-world environments on their way to work, school or a café on foot.

In their recently published paper, researchers Jackie Yang, Eyal Ofek, Andy Wilson and Christian Holz entertain the idea of “a future in which people spend considerably more time in virtual reality, even during moments when they walk between locations in the real world.” To do so, they created a VR system that allows its users to navigate the real world on foot while simultaneously seeing themselves strolling around in a place of their choosing in the VR world.

They named this VR system DreamWalker.

How does it work?

As reported by Ars Technica, it’s supposed to keep users fully immersed in the virtual world despite real world obstacles. To do that, DreamWalker is designed to find a path in the chosen VR environment that’s similar to the one the user is walking along in the real world.

It’s also designed with its own tracking system, which utilizes GPS locations, inside-out tracking and RGBD frames to guide users to stay on the right path, help them avoid obstacles and get them to their destinations, all while keeping them immersed in a dynamically changing VR world. 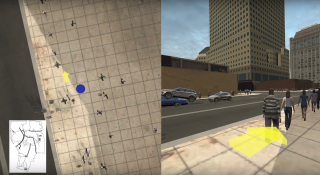 DreamWalker’s unrealistic graphics are not unlike The Sims video game series. 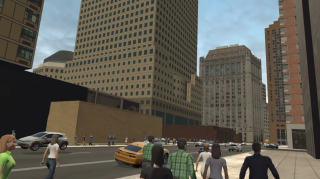 DreamWalker’s unrealistic graphics are not unlike The Sims video game series.

The team has gone so far as to test the system on eight participants, as seen on a YouTube video posted by Microsoft Research. These participants were asked to walk across the Microsoft campus along a 15-minute route while strolling around Manhattan in the VR world.

Of course, this VR system has a long way to go before it sees the light of day. In its current version, the VR scenes in DreamWalker aren’t exactly a more picturesque alternative to the real world, with unrealistic graphics not unlike The Sims video game series. This isn’t like in the movies, folks. At least, not yet.

Plus, real-life consequences of such a technology are easy to imagine. For instance, one tracking miscalculation, and the user could get hit by a car.

However, if or when perfected, DreamWalker could also potentially have many real-world applications.