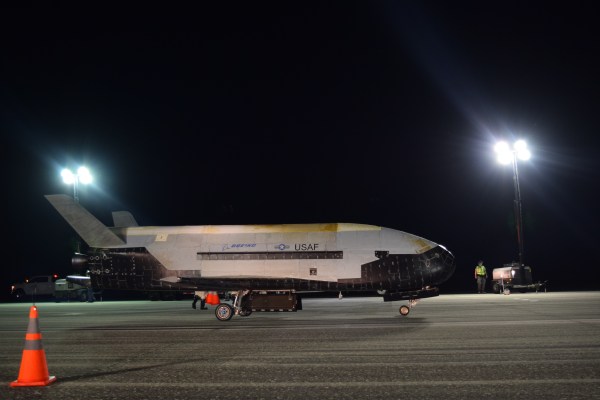 The X-37B, a test vehicle operated by the U.S. Air Force, has returned from orbit and landed successfully at NASA’s Kennedy Space Center in Florida, over two years after it originally launched on its latest mission aboard a SpaceX rocket.

The X-37B Orbital Test Vehicle, as its formally known, was on its fifth mission, which involved – well, we don’t really know. The whole point of X-37B is that its mission is mostly clandestine, so we likely won’t ever know the full particulars of what its been up to in its orbital jaunts. But we do know that it’s demonstrating technologies for USAF use, and specifically to help them develop a “reliable, reusable, unmanned space test platform.”

We know from the Air Fore that that means running a battery of test across systems including avionics, guidance, thermal shielding, propulsion, spacecraft re-entry systems and more. We also know that it’s around 30-feet long, like a kind of shrunk-down Space Shuttle, and we know that it’s built by Air Force contractor Boeing. And since this is the Air Force we’re talking about, we also know that the goals of any experiments run in the spaceplane are likely going to ramp up to defence and military use, which is a logical thing for the U.S. to pursue, given how quickly space is becoming a relative boom town, and how much money other states are spending on in-space defence and militarization.

The X-37B will spend some time on the ground after its record-breaking 780-day flight, and then will launch again sometime in 2020 from Cape Canaveral Air Force Station.