Jaguar is about to release a brand new sports car that can go 0-60 in only 1.9 seconds. The only catch? It’s a virtual car that will be available for the Gran Turismo 6 video game. Yet, it shows how automakers will help us choose a new car in the near future.

I’m a little surprised this isn’t more common. If you walk into a dealership today, expressing interest in a new car, most salespeople will lead you to the physical car. Yet, it makes sense if they let you try out cars in a virtual showroom first. I’ve been a fan of the Forza series for years, and have played many of the Gran Turismo games.

The Jaguar Vision GT is a coupe that borrows heavily from other real-world Jaguar sports cars. It has the typical long front hood and wide stance, with hints of the Jaguar D-Type. The virtual car is an all-electric with 750 kilowatts of power and 885 lb-ft of torque. 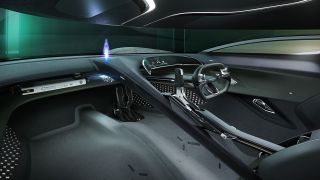 It weighs only 1,400kg and has a 50:50 weight distribution. What’s truly amazing is that anyone can drive it. If you own Gran Turismo 6 for PlayStation, it will be a free download next month.

That’s impressive because it gives anyone the experience of driving a high-end car (one that doesn’t exist in the real world) and to get a sense of the driving mechanics, speed, handling, style, and feel of the car. Jaguar says the Vision GT is a hint of where the car company is heading in the future but it’s also helpful for anyone looking for a new vehicle because it can help you decide if you like the feel, the drive, and the features.

Racing sims have improved dramatically in recent years, especially with the Forza series. I’ve tested a physical version of a Corvette that’s sitting in my driveway and then tested the virtual version in the game and it mimics exactly how the real vehicle feels. Forza designers, in particular, use the actual specs from cars modeled in the game so that they brake, handle, and accelerate the same way in the simulation as they do on the road.

In the near future, racing games will switch from a mere entertainment venue to something much more practical. We’ll be able to test the latest model of a Ford or Chevrolet in a simulation and find out how it handles on roads we already know, helping us to understand safety features and choose between different trim levels. Other car companies have released virtual test cars for Gran Turismo as well, including Bugatti, Mercedes-Benz, BMW, and McLaren. The next step is to make them available either through a browser window or in a showroom when you go shopping and to make it easy to drive multiple vehicles. Imagine a scenario where you can pick from different makes and models that match your driving preferences, then take the real car out on the road as well to see if it matches the virtual experience.

This will also help when cars become more fully automated. We can become the virtual passenger in an autonomous car driving on a road we’re already familiar with as a way to experience what that will be like. That will help with buying decisions but even in the future when we merely rent cars temporarily. It will give us a taste of what to expect when we are no longer in the virtual cockpit and ready for the real experience. 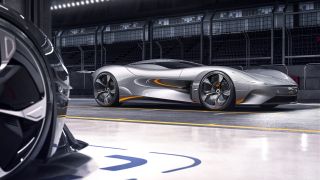 On The Road is TechRadar’s regular look at the futuristic tech in today’s hottest cars. John Brandon, a journalist who’s been writing about cars for 12 years, puts a new car and its cutting-edge tech through the paces every week. One goal: To find out which new technologies will lead us to fully self-driving cars.