By the numbers: Apple crushes it again

A quick glance at the Apple Q4 2019 earnings report shows the company just finished a record three months, but a deeper dive into the numbers reveals how Apple managed to pull in more revenue than it ever has in a July-through-September period, including strong increases from wearables, iPad and Services.

Apple took in 2% more revenue last quarter than it during the same period of last year, and vastly more than it did in Q4 2017 or 2016.

Apple total revenue was up in the July-September quarter (in red).
Chart: Ed Hardy/Cult of Mac

On this chart, remember that the July-September period is Q4 of Apple’s financial year. So compare the most recent Q4 figures (in red) to the past three years, noticing that it’s higher than any of them.

International sales accounted for 60% of the quarter’s revenue, according to Apple.

But the situation isn’t as rosy for profits; the iPhone maker had less to show at the end of the quarter. The same happened in Q1, Q2 and Q3.

Profits were down year-over-year in Apple’s most recent financial quarter (in red).
Chart: Ed Hardy/Cult of Mac Clearly, the company’s expenses have gone up, as improved revenue in the July-to-September time period didn’t lead to additional profit.

Just about all the problems Apple is experiencing come from a slow-down in iPhone demand. Follow the red bars to see there was a 10% decline in revenue from iPhone sales between its financial Q4 2018 and last quarter.

Notice that that same year-over-year decline in handset sales happened for every quarter in Apple’s fiscal 2019.

The situation isn’t as bad for Mac. The July-September period includes back-to-school buying, and it’s almost as important for Apple as the holiday shopping season. So it’s not good news for the company that revenue from Mac sales was down 6% year-over-year in its financial Q4 2019.

That said, Mac sales saw year-over-year increases in Apple’s financial Q3 and Q1 2019. So this drop is more of an anomaly, possible because people were hoping for the much-rumored 16-inch MacBook Pro.

But there was certainly no slow-down iPad sales. Not only do Apple’s offerings dominate the tablet market, revenue was up 13% year-over year.

iPad sales have gone up year-over year since the beginning of fiscal 2018.
Chart: Ed Hardy/Cult of Mac
And this is part of a two-year trend. Since the 2017 holiday shopping season, iPad sales have improved each and every quarter, on a year-over-year basis.

And there’s apparently enormous potential in wearables because Apple keeps raking in money. That’s why Amazon and Microsoft are introducing competitors to AirPods. 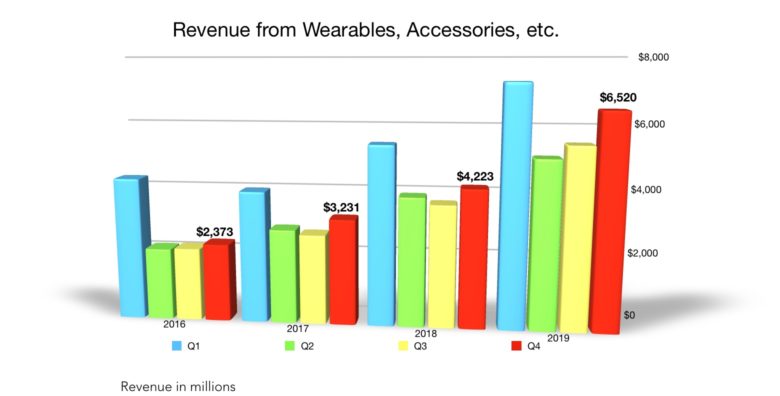 Growth in wearables and accessories has been consistently very strong for years.
Chart: Ed Hardy/Cult of Mac
Also included here are Apple Watch, Apple TV, Lightning cables, cases, and other accessories, and revenue from this whole category grew 54% year-over-year. Its rise by $2.2 billion added significantly to Apple’s total revenue increase.

Revenue from Services grows every quarter

Services is different from this company’s other products. Rather than being cyclical, with strong sales in the holiday season that drop off in other quarters, revenue from Services just keeps growing. 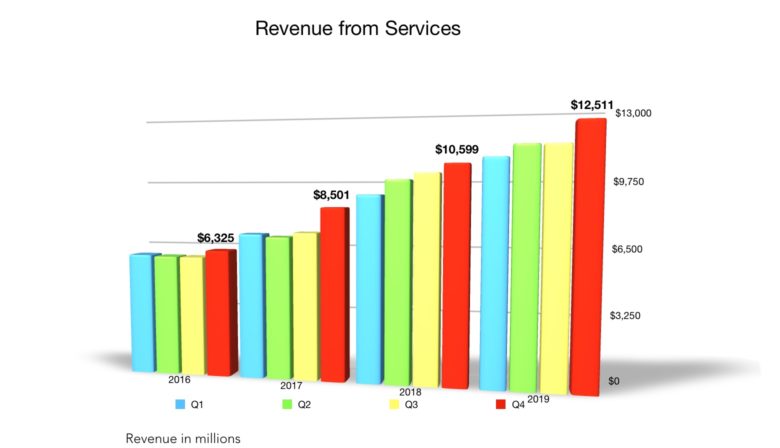 Nothing cyclical here. Services revenue goes up almost every quarter, winter and summer.
Chart: Ed Hardy/Cult of Mac
In the financial fourth quarter, it was up 18% year over year. And this is before Apple Arcade and Apple TV+ launched. This company’s Services review for the current quarter is likely to be up dramatically.

While Apple is working hard to grow all its various businesses, the iPhone is still its most important product by a wide margin.

In the July-September period, it accounted for more than half of Apple’s revenue. But that’s not always true, and the company anticipates Services taking up a larger percentage in the coming years.