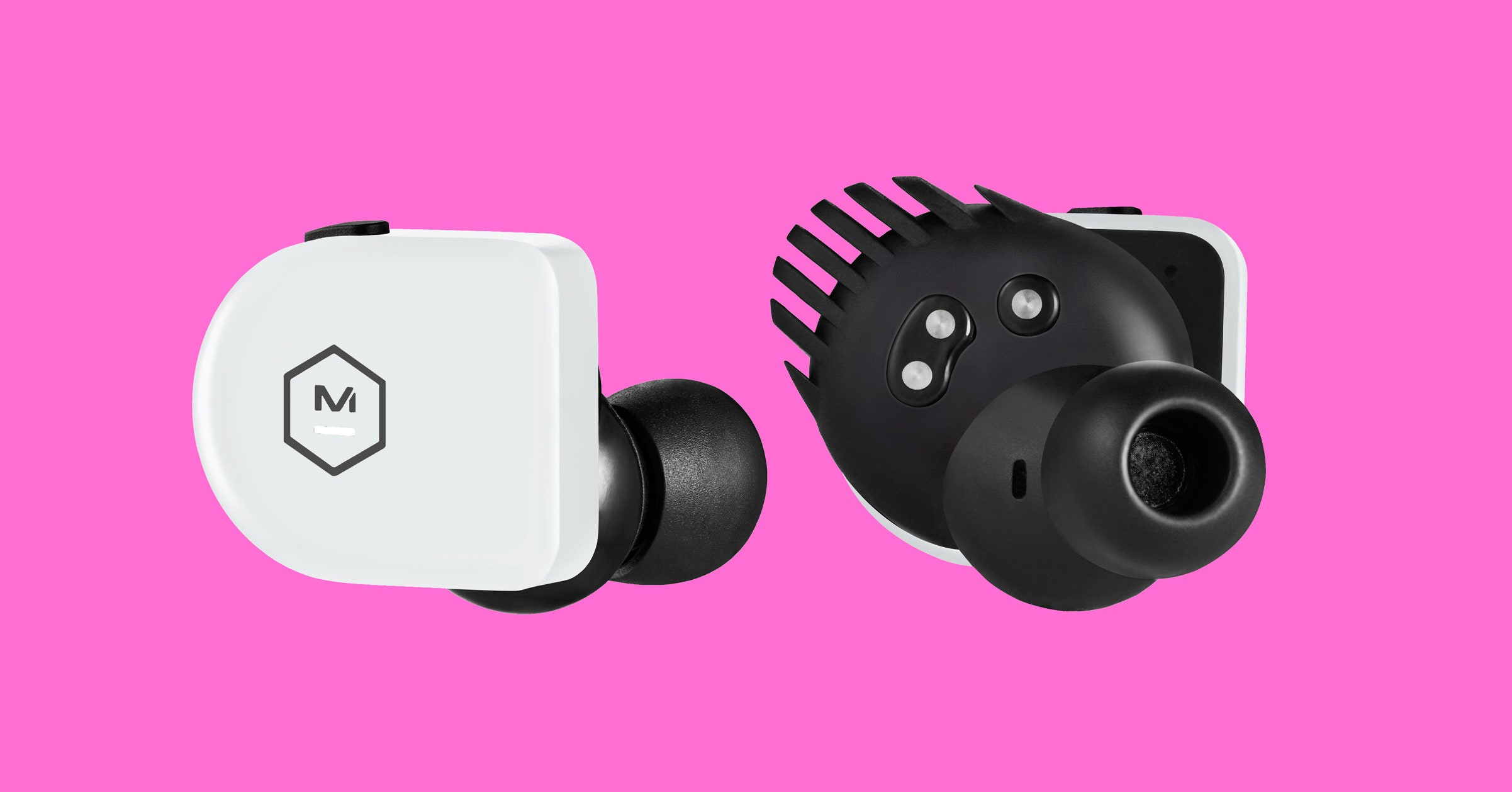 Master & Dynamic headphones are great. But until now, I’ve never considered buying any.

The fashion-forward New York brand has made striking, fantastic-sounding headphones since launching in 2014, but never offered the best performance for the money. No matter what style of headphones Master & Dynamic developed, it always felt like Sony, Bose, or some other big-name brand had something similar for hundreds of dollars less.

That’s how I felt about the company’s first wirefree earbuds, the model MW07. The sleek, D-shaped in-ears sounded fantastic and fit great, but at $300 per pair—and with nearly half the battery life of $160 AirPods—it was tough to wax poetic about them to anyone who hadn’t already mentioned their “little condo” in Sun Valley.

Times have changed. The $200 MW07 Go are water-resistant workout ‘buds that offer a whopping 10 hours of battery life. Master & Dynamic have finally made headphones for those of us who buy our luxurious Charmin at Costco.

One of the best things about the Go is how great they feel. Like the original model, they come with five comfy silicone ear-tip sizes and three different ear fins, allowing them to twist inside your ears and stay situated with a sort of pillowy leverage. This time, however, the headphones are a bit smaller and lighter, which means they don’t jostle as much when you’re out on a jog.

The firm but cozy fit provides epic passive noise isolation. On numerous occasions, I was totally unaware that someone was talking to me until I actually saw their lips moving, which isn’t something I can say about many other completely wireless earbuds.

Such a great seal has sonic benefits, providing space for the MW07 Go to showcase a wide and detailed soundstage that’s among the best I’ve heard from any wireless earbuds.

Lately, I’ve been obsessing over Julia Jacklin’s new album Crushing, and the Australian singer’s high-pitched voice sounds crisp and airy on the MW07 Go, with a bright, silken quality. A bold kick drum balances well with the whisper quiet piano on the opening track “Body”—an elegant detail that’s often lost in other earbuds. The 10-mm beryllium drivers retain the music’s height and crispness, but still give me the bass thump I need to finish out a rainy Portland jog.

The headphones feature Bluetooth 5.0 for 100 feet of connection (this distance is becoming standard), and the AptX codec improves the quality of Bluetooth streaming. Realistically, not everyone can tell the difference between AptX and non-AptX audio. It’s nice to have the premium-feeling placebo, either way.

The controls actually work without too much hassle, which is rare for wirefree earbuds. There’s a physical volume rocker and a play/pause/voice assistant button on the top of the earbuds, and they’re placed so that you can easily change what you need without messing up the balance of the headphones in your ear.

Competitors from Sony and Beats use physical buttons or touch-sensitive pads on the outside of each bud. Physical buttons usually force you to push the headphones into your ear (ouch!) when you want to pause a song, and touchpads sometimes misfire if you’re fingers are sweaty—accidentally pausing a track when you’re trying to adjust them mid-run.

Speaking of running: I covered about 30 miles in my two weeks with the MW07 Go, and they have performed admirably. An IPX6 rating means the headphones can resist jets of water from a shower or sink. A quick rinse after each workout rendered my pair clean.

The MW07 Go does lack a mode that boosts the ambient sound around you. (This is sometimes called “transparency” as well.) These modes pipe in outside noises so you can hear traffic and other sounds from the outside world while you’re listening to the concert between your ears.

I used to speak highly of transparency, but the reality is I almost never use it. I’m most concerned about hearing cars/fellow commuters when I’m on a bike, but wind noise often renders transparent modes useless. On runs, I prefer to block out the outside world entirely. My opinion is that I’ll still hear a car horn without transparency, and I should probably pay enough attention to avoid getting slammed into regardless.

The charging case is another small miss. It’s a pretty, cloth-lined treasure chest that easily fits in your pocket or backpack, but it only includes 12 hours of additional listening time—a little more than one full recharge. That’s not a ton of extra juice, but quick-charging helps. The Go will get five hours of play time with just 15 minutes back in the case and fully recharge in 40 minutes, so you shouldn’t have to plan ahead to eek out some extra hours.

Go Your Own Way

At the end of the day, that’s what makes this new Master & Dynamic model so great: flexibility. They’re pretty enough that you can wear them in an office, durable enough that they’ll last through your sweatiest workouts, and they sound good enough that you won’t reach for another pair of headphones outside of the gym.

They’re also reasonably priced for premium earbuds. They’ve got more battery life and a better fit than the $200 Powerbeats Pro and $230 Sony WF-1000XM3. They beat both on sound.

After years spent telling the working class to buy something cheaper and less elegant, I feel satisfied to write: Check out these brand new Master & Dynamic headphones. They’re downright fantastic for the money.

If I didn’t have a half-dozen other wireless buds staring down my eardrums, I’d buy myself a pair.

(You can buy the MW07 Go from Master & Dynamic or Best Buy.)