Motorola One Hyper launch could be near, NBTC certification surfaces

Motorola’s next member of the One family is going to be the Moto One Hyper. The device was first leaked a few months ago but has now passed through NBTC, implying a launch very soon.

Earlier this year, Motorola brought a new naming scheme for its smartphones, by bringing them under the ‘Moto One’ canopy, with each of them specializing in different aspects. The Moto One Hyper will be the latest addition to the family, with a 64MP camera module along with a pop-up selfie camera for a notch-less front. 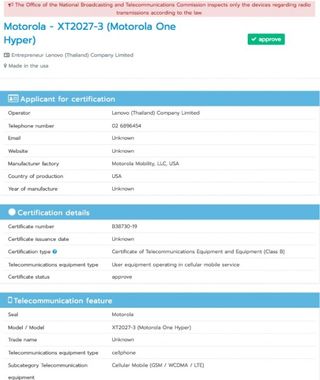 Leaks suggest that the Moto One Hyper, just like other phones from Motorola recently, is a mid-ranger powered by a Snapdragon 675 chipset with 4GB of RAM and 128GB of storage.

The front will sport a 6.39-inch IPS LCD panel with a Full HD+ resolution and will have no notch or holes for the selfie camera. The 32MP front camera will reside in a housing that will pop-up from the top edge when needed.

The back of the Moto One Hyper will house a 64MP primary camera, likely to be the Bright GW1 image sensor from Samsung along with an 8MP depth sensor. There’s also a physical fingerprint scanner under the cameras.

According to its leaked FCC listing, the phone will be powered by a 4,000 mAh. Fast charging support over USB Type-C is also expected. 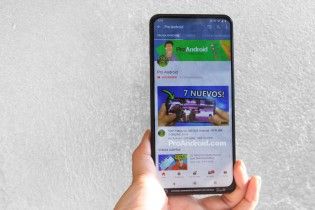 Motorola is yet to confirm a launch date for the One Hyper but has only one event on the horizon on November 13, where the next-gen Moto Razr foldable will be unveiled. We could hear more about the Hyper at the same event.