It’s no secret that Red Dead Redemption 2 has had a bit of a rocky launch on PC. When the game first hit the streets, it couldn’t even run on our test systems, and we weren’t the only ones facing this issue. Now, Rockstar has patched the game to make it playable, which means we can finally ask “how does it run?”.

Well, the answer is a bit complicated. In general, the game is very demanding, and even the most powerful hardware on the market is going to have trouble running the game at a smooth framerate at 4K. However, we did see playable performance out of every card in our testing lineup, but anyone looking to rock this game on a high refresh rate gaming monitor might end up disappointed.

Red Dead Redemption 2 does look incredible on PC, so we weren’t expecting 120 fps at 4K anyways. But just to be thorough we collected seven of the best graphics cards on the market, from the AMD Radeon RX 5700 to the Nvidia GeForce RTX 2080 Ti, so you can get an idea of how Red Dead Redemption 2 performance will look like on your gaming PC. 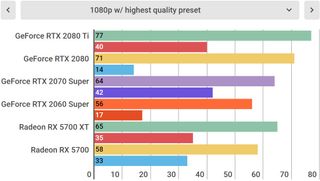 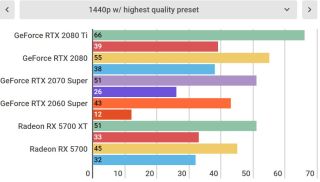 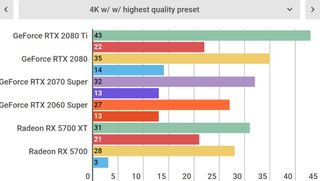 Red Dead Redemption 2 is a heavy PC game to run, which shouldn’t be too terribly surprising. After all, the game made all kinds of headlines upon its console release in 2018 for being one of the most beautiful games ever made, so of course the PC version, with its enhanced visuals, is going to make PC hardware cry out in pain.

You simply will not be able to run the game at 4K 60 fps on the highest graphics preset with current hardware, unless of course, you have some exotic setup with 2 RTX 2080 Tis in SLI. Even in 1440p, if you want all the eye candy turned on, you’re going to need an RTX 2080 to take advantage of it.

In our testing, the RTX 2080 Ti averaged just 43 fps at 4K, and only barely managed to break that 60 fps barrier at 1440p with 66 fps. And, if you have budget hardware, you’re going to have trouble even at 1080p. The Nvidia GeForce GTX 1660 Super, which generally is a 1080p champion, struggled at this resolution, getting an average of just 42 fps.

This isn’t an issue that’s isolated to the benchmark either: we noticed that when playing through the intro the game would just randomly pause – sort of like watching a scratched DVD back in the day. We’re not sure what’s causing this issue, but we expect it will be getting patched out.

At the time of this writing, the PC port of Red Dead Redemption is a little bit rough, so it may be prudent to wait on buying it for a little while, at least until Rockstar fixes these performance issues. 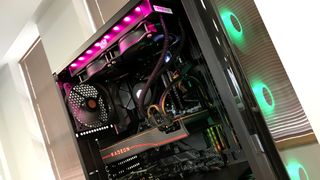 What kind of PC do you need to play Red Dead Redemption 2?

Red Dead Redemption 2 is a hard game to run, but the system requirements look pretty reasonable. In fact, we think Rockstar was a little too optimistic when listing these out, as this low-end hardware might have trouble producing a playable experience.

We went ahead and listed the system requirements for Red Dead Redemption 2 down below.

It should be noted, however, that Nvidia itself came out and said that these system requirements are a little too tame. Team green suggests an Nvidia GeForce RTX 2060 for 1080p at High settings, and in our testing, that pretty much checks out. So, we went ahead and crafted our own recommended gaming PC specs for Red Dead Redemption, and listed them down below.

We went with the Intel Core i5-9600K because, while the game will pin several cores, we didn’t see more than one or two cores hit high usage. That means higher clock speeds will likely benefit performance more. As far as RAM goes, the game peaks at around 9GB of usage, so you don’t need to worry about forking over the cash for a 32GB kit.

And, because, generally AMD cards fared better than Nvidia in this title, the AMD Radeon RX 5700 is pretty much the perfect card for this game at 1080p, and should provide a good 1440p experience too – just don’t expect to be able to max the game out.

We went ahead and included our exclusive price comparison tool down below, so that you can get a good deal on the hardware you’ll need for Red Dead Redemption 2.