Audi’s next all-electric vehicle, the e-tron Sportback, is a “coupé” SUV

Audi revealed Tuesday evening in Los Angeles the e-tron Sportback as the German automaker begins to chip away at its plan to launch more than 30 electric vehicles and plug-in hybrids by 2025.

The e-tron Sportback reveal ahead of the LA Auto Show follows the launch earlier this year of Audi’s first all-electric vehicle, the 2019 e-tron.

Audi has delivered 18,500 of its all-electric e-tron SUVs globally since March 2019 when the vehicle first came to market. And the company is hoping to grab more, and different, customers with the Sportback. 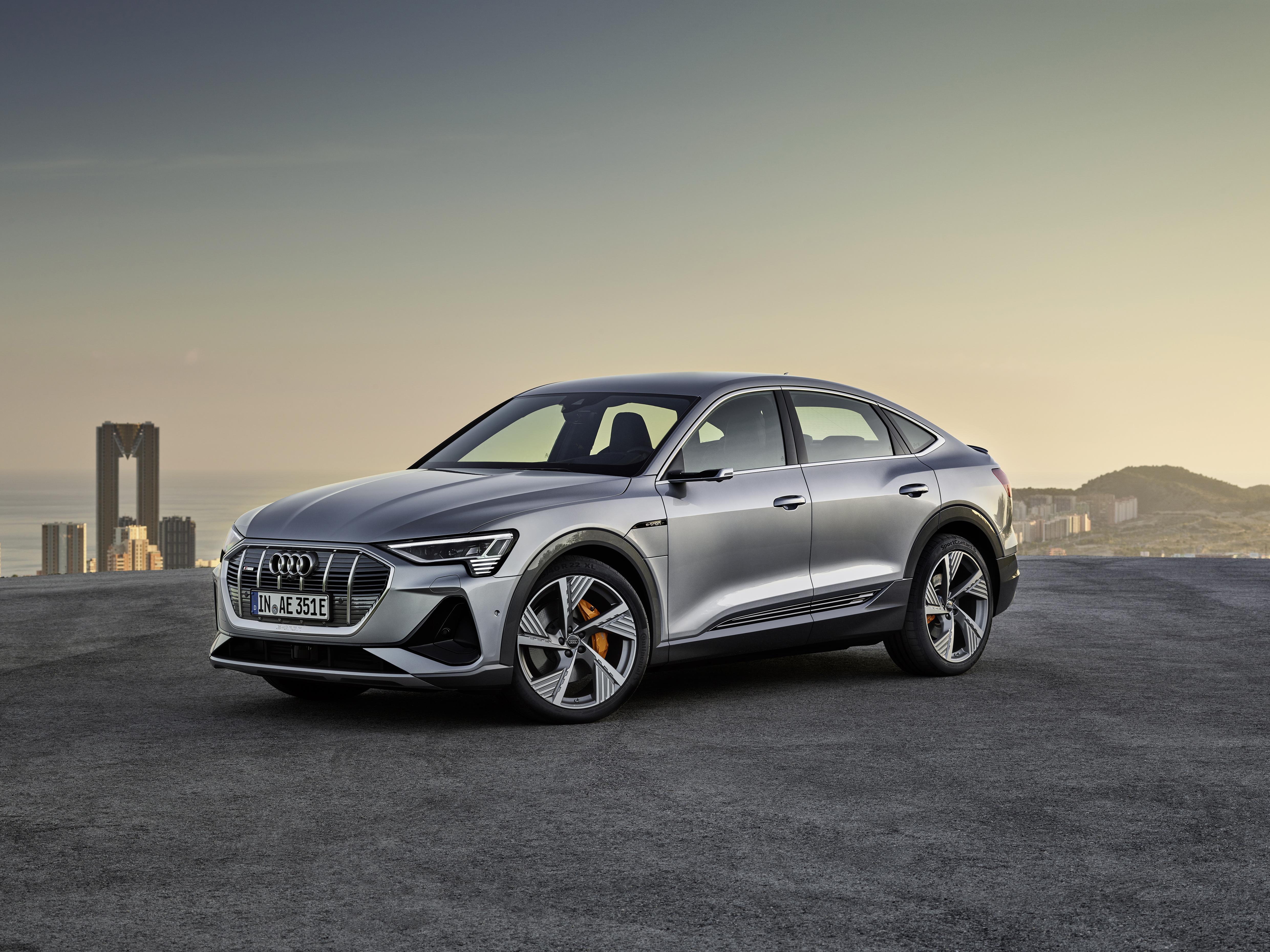 Audi calls this e-tron Sportback a SUV coupé, the latest evidence that automakers are comfortable pushing the boundaries of traditional automotive terminology. This is not a two-door car with a fixed roof and a sloping rear, although there are “coupé” elements in the design.

This is in fact a SUV with a roof that extend flat over the body and then drops steeply to the rear — that’s where the coupé name comes in — and into the D pillar of the vehicle. Then there’s the classic “Sportback” feature in the body where the lower edge of the side window rises toward the rear.

There are design details repeated throughout the exterior, specifically the four-bar pattern in the headlamps, front grille and wheels. And of course there are special interior and exterior finishes – 13 paint colors in all — and a first edition version customers can buy. The base price of the Sportback is 71,350 ($79,000).

But importantly, besides some styling and design changes, this vehicle boasts longer range and for everyone outside the U.S., futuristic looking side mirrors and new lighting tech.

The 2020 Audi e-tron Sportback has a 86.4 kilowatt-hour battery pack that has a range of up to 446 kilometers (277.1 miles) in the EU’s WLTP cycle. The EPA estimates aren’t out yet, but expect the range numbers to be slightly lower.

The company is targeting an EPA range of about 220 miles over the 204 miles of range that the regular e-tron gets.

Audi was able to improve the range by increasing the net battery capacity. It also decoupled the front motor and improved the thermal management.

Audi is known for its lighting and the company has made this a key feature in the Sportback. The vehicle has a new digital matrix headlights that breaks down light into tiny pixels. The result is precise lighting that has high resolution.

Inside the headlight is a digital micromirror device that acts like a video projector. Inside the DMD is a small chip from Texas Instruments that contains one million micromirrors. These micromirrors can be tilted up to 5,000 times per second.

The upshot: The headlights can project specific patterns on the road or illuminate certain areas more brightly. And for fun, animations like the e-tron or Audi logos can be projected on a wall when the vehicle is stopped.

Check out this video to see it in action.

The safety piece of this is the most interesting. For instance, on a freeway the light might creates a carpet of light that illuminates the driver’s own lane brightly and adjusts dynamically when he or she changes lane.

Then there are the virtual exterior mirrors. This wing-shaped side mirror doesn’t have an exterior mirror. Instead, it supports integrate small cameras. The captured images appear on high-contrast OLED displays inside the car between the instrument panel and the door. 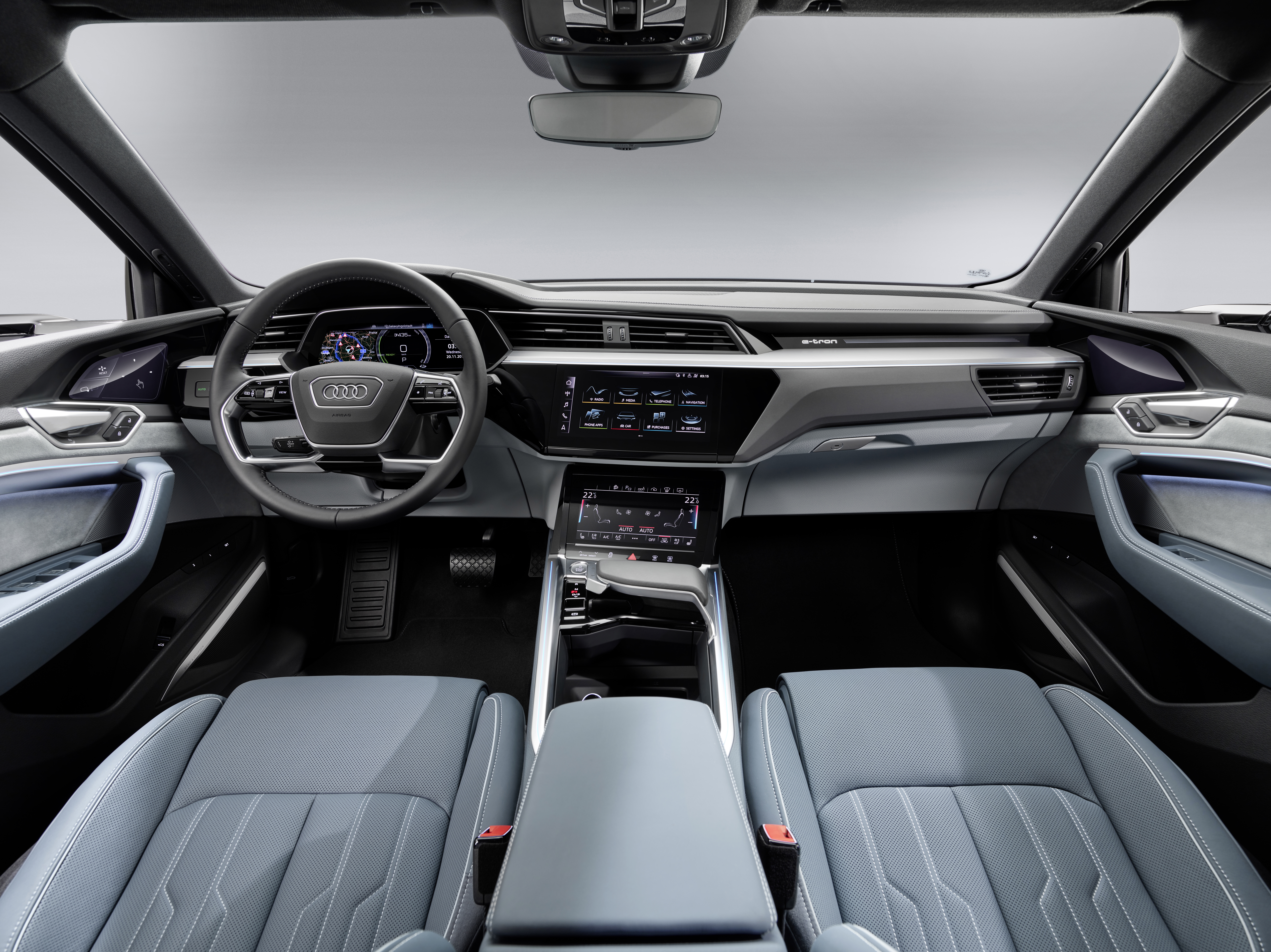 If the driver moves their finger toward the surface of the touch display, symbols are activated with which the driver can reposition the image. The mirrors can be adjust automatically to three driving situations for highway driving, turning and parking.

Neither the mirrors of the digital matrix LED lighting is available in the U.S. and won’t be until the government changes its Federal Motor Vehicle Safety Standards, or FMVSS, which are the regulations that dictate the design, construction, performance, and durability requirements for motor vehicles.