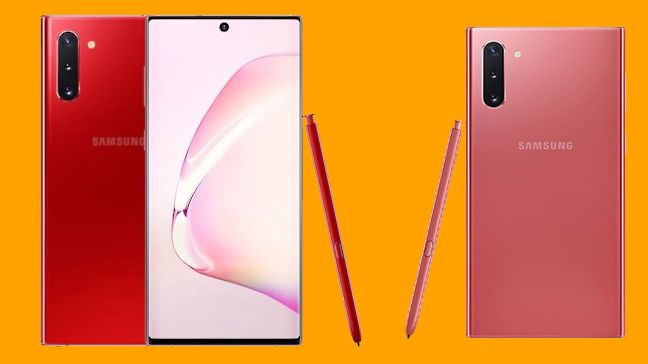 Samsung has a perk for anyone who signed up for early access to its pre-Black Friday deals. Those who did will be able to order the Galaxy Note 10 in two new colors: Aura Red and Aura Pink.

While these two new colors are available first to shoppers who signed up to the deal, Samsung is also planning to make them publicly available starting at 12:01am Eastern Time on Thursday, November 21. That means the public availability is just hours away.

The announcement of these new colors notes that they are “available in limited quantities”. So it’s very possible they’ll sell out quickly. They’re even limited to just the Note 10, and won’t be available on the Note 10 Plus.

Shoppers who signed up for the early deals can improve their chances of picking up the Note 10 in one of the new colors by ordering today. Anyone who didn’t sign up and hopes to get the new colors will likely want to jump on that chance as soon as they can after midnight (early in other US time zones). Curiously, though, we’re currently able to add them to our cart on Samsung.com despite not being signed up for the early deals.

Luckily, Samsung is also making it cheaper to pick up the Note 10. It has a trade-in discount for the flagship device that can cut the price down dramatically, bringing the starting price as low as $309 depending on the phone your trade in. It’s also throwing in a pair of Galaxy Buds as a bonus, which have recently seen some nice improvements.

Right now, the starting price for an unlocked Galaxy Note 10 is $949, but that can go down to $509 with an eligible trade-in. A further drop to $309 is no small discount, though it will take a fairly recent flagship device to get that substantial trade-in value, like the Galaxy S10 or iPhone XS Max.

If you want to get those deals, you’ll have to wait for the the pre-Black Friday discount to kick in.